Does stress cause weight gain?

There are several reasons for weight gain – some related to lifestyle factors (the most common causes), physiological responses like pregnancy and pathological factors like diseases of the thyroid or adrenal glands. Weight gain in most instances is a result of consuming more calories than is needed for energy production to maintain life processes and facilitate the daily physical activities. In other words, eating more than is needed for physical activities in a day will lead to a storage of the extra calories in the form of fat – the ultimate storage form of nutrients. One of the lesser known contributing factors is psychological stress that can lead to weight gain through various mechanisms.

Stress these days takes on a different meaning with modern life. Whereas in the wild stress means fighting or fleeing for survival, the human body has to now contend with intense psychological stress ranging such as emotional strain, career pressures and financial worries. The human body has several mechanisms to deal with stress which is largely regulated by the neuroendocrine system. Impulses in the brain stimulate the master gland of the body (pituitary) and hypothalamus to secrete a number of different hormones. This triggers the “fight or flight” response.

The fight or flight response is mediated mainly by two hormones – the short acting adrenalin and long acting cortisol. This allows for the following :

There are several other effects on the body which makes the senses more acute, shunts blood away from the non-vital organs for immediate survival and so on. Although this hormone-mediated response was intended to provide the body with resources to either flee the scene of danger or flight off the menace, it is also triggered by psychological stress. The fight or flight response was intended to be a short-lived response for survival. 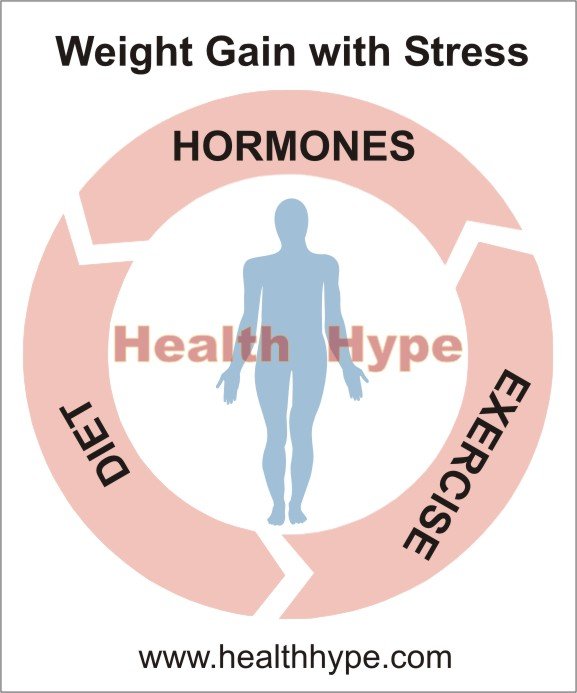 However, psychological stress in modern life is such that the stress does not resolve within minute or hours. Therefore the body is in this constant state for days, weeks or months and sometimes years. It has a profound impact on the normal physiology and one of these effects is that it contributes to fat accumulation and therefore weight gain over the long term.

Adrenalin and cortisol are the main hormones responsible for the stress response. However, various other hormones like insulin also play a role in the long term by indirectly being stimulated due to the action of cortisol in particular. Adrenalin has a short term effect but cortisol then follows to have a long term role.

Cortisol was initially intended to help the body recover from the flight or fight response. However, high cortisol levels (hypercortisolism) over the long term can be detrimental to the health of a person. One of the important ways that cortisol contributes to weight gain is by increasing the body fat content. The other mechanism is by reducing the muscle bulk and disrupting blood glucose regulation.

Muscles being the most energy demanding cells in the body consumes significant amount of calories even at rest. As the muscles shrink, the energy consumption also decreases. In the backdrop of increased fat storage, the reduction in muscle bulk further contributes to the problem of weight gain associated with stress.

Cortisol also diminishes the effectiveness of insulin while raising the blood glucose levels. The pancreas tries to counteract this by secreting more insulin which in turn leads to high insulin levels in the blood (hyperinsulinemia). The insulin resistance contributes to weight gain as well as a host of other disturbances in the body, which is collectively referred to as metabolic syndrome.

There are several lifestyle factors that contribute to weight gain. This occurs independent of stress but is often worsened when a person is undergoing intense psychological stress. The two main factors here are nutrition and exercise. Weight gain in this regard revolves around the calories consumed versus the calories utilized as explained in calorie count.

Eating habits often change with any upset in life and the same may occur with long term psychological stress. The main issues arise with :

Ultimately all these aspects contribute to one factor in weight gain – eating more calories in food than consuming calories through physical activity. The net result is storage of the excess calories in the form of fat. Furthermore not maintaining a constant intake of calories by irregular meals causes fluctuations in glucose levels particularly with cortisol increasing the glucose levels and insulin trying to lower it. The body may therefore store more calories during larger meals than it normally would. This also contributes to fat accumulation.

The lack of sufficient physical activity is a problem in modern life and exacerbated during periods of stress. Living in an age where most people do not undertake sufficient physical activity in the course of daily life, specific periods of time has to be allocated to exercise and sports. However, during periods of stress, a person is not usually as dedicated to exercising and playing sports as would normally be the case.

Less calories are therefore utilized compared to the calories consumed. The net result is storage of the excess calories which equals to fat accumulation and weight gain. This is further compounded by the stress hormones like cortisol which contributes to fatigue thereby making a person lethargic and less motivated to exercise.

Even with physical activity, a person undergoing psychological stress may notice diminished endurance and strength once again associated with the effects of cortisol – fluctuations in glucose levels and loss of muscle bulk. However, exercise on its own has been found to beneficial to dealing with periods of prolonged psychological stress and could help break the cycle associated with the stress hormones and poor dietary habits.