Chronic obstructive pulmonary disease or COPD is a progressive, often irreversible condition of the distal airways (bronchi and bronchioles) and lung tissue. The two main conditions that make up COPD are chronic bronchitis and emphysema and since most patients have both conditions concurrently, COPD is a more concise description.As the name suggests, the condition is chronic (long term) and while most cases are irreversible, there may be a reversible component in a minority of COPD patients.

There are other obstructive pulmonary diseases, like asthma, but since the bronchospasm in this condition is reversible, it does not fall under COPD. Despite this differentiation, the clinical presentation of asthma, chronic bronchitis and emphysema may overlap to a large degree. COPD is the main type of lung disease seen in cigarette smokers, whereas asthma may affect any person of any age with underlying hypersensitivity.

COPD is characterized by breathlessness that is more pronounced in the early stages of emphysema but just as significant in the late stages of chronic bronchitis. Poor oxygenation of the lung with a concurrent accumulation of carbon dioxide in the blood stream is present in both conditions, although the emphysema patient may be well oxygenated in the early stages. Small airway disease, which is a type of chronic bronchiolitis, is present in both emphysema and chronic bronchitis, further contributing to narrowing of the airways and restricted airflow.

Although the common term smoker’s lung is used to describe both conditions due to the similarities, there are distinct differences in both chronic bronchitis.

Chronic bronchitis is the persistent inflammation of the bronchi and bronchioles resulting in a cough and sputum production that persists for at least 3 months in two consecutive years.

Emphysema is an abnormal enlargement of the air spaces with destruction of the alveoli distal to the terminal bronchioles that is irreversible.

Although asthma is not part of COPD, it is worth clearly defining it to differentiate between these conditions. Asthma is a reversible bronchoconstriction as a result of hypersensitivity triggered by exposure to various allergens.

The most common contributing factor in the development of COPD is tobacco smoking. While it is known to cause COPD, not every smoker will develop these diseases. Other causes includes exposure to industrial dusts like in cotton factories and frequent exposure to gases like sulfur dioxide. Second hand smoke (passive smoking) is an equally significant cause of COPD. Less commonly, a congenital deficiency of alpha-1 antitrypsin (AAT), may contribute to COPD as discussed below. 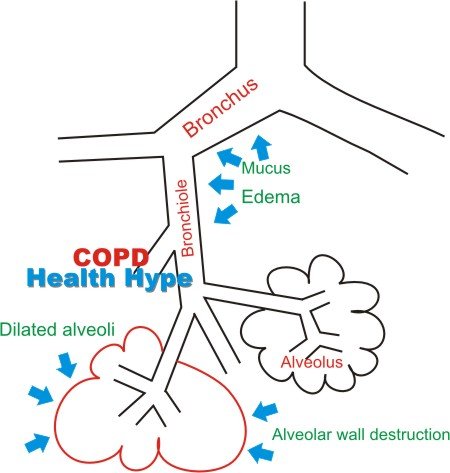 In chronic bronchitis, tobacco smoke irritates the lining of the airways and inflames the bronchi and bronchioles. Excess mucus production in the bronchi is a result of the irritation and further exacerbated by enlargement of the submucosal glands and goblet cells which produce mucus. Narrowing of the airways as a result of smooth muscle hypertrophy and mucus accumulation restrict the inflow of air.

With emphysema, the structural changes to the airways also cause it to collapse during expiration and therefore ‘trap’ air within the lung. The overstretching of the air sacs of the lungs, coupled with the proteases secreted by the neutrophils/macrophages in the lung tissue in response to free radicals in cigarette smoke damages the alveoli.  AAT (alpha-1 antitrypsin) usually blocks the action of these proteases but in COPD, there may be a congenital deficiency or functional deficiency of AAT. The elastic recoil of the lung is lost over time further compounding hyperinflation of the lungs.

Chronic bronchitis and emphysema are two of the more common types of chronic obstructive pulmonary diseases (COPD). These are conditions that affect normal air flow and gas exchange through the airways and lungs. It mainly occurs in long-term and heavy smokers but due to individual susceptibility, not every smoker is affected. Both conditions often overlap in patients and may co-exist to varying degrees. One condition, however, will be predominant and there are important differences, both in the pathogenesis and clinical presentation, that should be noted.

Emphysema is an abnormal dilatation of the air spaces with destruction of alveolar walls (lung air sacs).  It is at these walls that the main exchange of gas between the air and the blood stream occurs. The terminal and respiratory bronchioles are often involved as well. Air flow restriction is primarily due to the loss of lung elasticity although airway narrowing may also be present.

Chronic bronchitis is the persistent inflammation of the bronchi and bronchioles with a cough and sputum lasting for at least 3 months in two consecutive years. The most notable feature of chronic bronchitis is the excessive mucus production in the airways that obstruct the flow of air, which is also compounded by smooth muscle hypertrophy and swelling of the walls of the bronchi and bronchioles.

There are a number of differences in the clinical presentation, demographic and results of investigations but this may vary. The prominent physical presentation that may indicate a difference between the two conditions are discussed below. 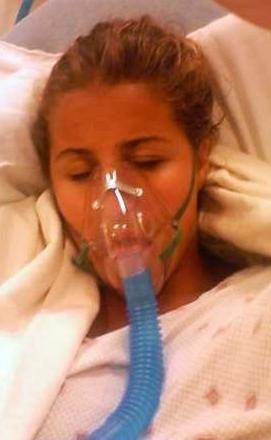 The “blue bloater” versus “pink puffer” phenotypes are used to describe the typical presentation of chronic bronchitis and emphysema respectively. This is related to the oxygen and carbon dioxide levels in the blood (oxygenation), difficulty breathing (dyspnea) and complications like cyanosis, polycythemia and edema.

“Blue bloaters” in chronic bronchitis describes the poorly oxygenated lung where hypercapnia (excess carbon dioxide in the blood) leads to cyanosis (bluish discoloration especially of the lips and limbs) and edema (swelling), initially of the periphery and then generalized often associated with acidosis and right heart failure. Read more on chronic bronchitis symptoms.

The “pink puffer” emphysema patient is initialy well oxygenated but strains to breathe due to collapse of the airways during expiration. This leads to the pursed lips with prolonged exhalation and polycythemia (too many red blood cells) causes redness of the skin. Read more on emphysema symptoms.

However, in the poorly oxygenated emphysema patient, this typical pink puffer appearance may not be present. It is also important to remember that both chronic bronchitis and emphysema may co-exist thereby altering the presentation from that which is expected of the typical blue bloater and pink puffer phenotypes.

Cough is present from the early stages of chronic bronchitis and the sputum is profuse, often increasing as the disease progresses. With emphysema, mucus production is minimal and cough becomes evident in the late stages. Acute infections may further exacerbate mucus production in both types of COPD although it is more common in chronic bronchitis.