What is Wilson’s disease?

Wilson’s disease is a genetic disorder that hampers the body’s ability to bind and transport copper thereby leading to accumulation of copper in the body. Over time copper deposition occurs in various different organs and tissues. Copper in its free form is toxic and damages the organs where it accumulates. As the body is not able to manage the copper appropriately, the metal builds up in the body from the time of birth. However, symptoms may only be noted by the age of 5 years or even later in life. Wilson’s disease is rare and only affects about 1 in 30,000 people.

Copper Accumulation in the Body

Copper is present in small quantities in the human body. It is primarily sourced from food absorbed in the gut. Copper is toxic in the free state and is normally bound to certain proteins (ceruloplasmin) which renders it non-toxic. Copper toxicity arises when :

Copper is processed in the liver. Normally excess copper would be excreted in the bile but in Wilson’s disease, the impaired processing of copper means that it accumulates within the liver. Eventually the liver tissue is severely damaged and liver cells degenerated – cirrhosis. Copper in the liver diffuses out into the bloodstream and can accumulate in various organs. The brain is one of the main organs where this copper deposition occurs and this destroys brain tissue.

The process does not occur overnight. It happens over years and decades and essentially starts from the time of the birth. The first symptoms of copper toxicity are seen as early as 5 years of age. It is mainly symptoms of liver dysfunction but these symptoms can sometimes go unnoticed. Eventually the other symptoms become evident, sometimes as late as in the 30s. At this point neurological symptoms become evident and this may be the first indication of the disease.

Wilson’s disease can be categorized by four stages as the condition progresses and copper deposition extends to various organs in the body.

This is the stage during which copper accumulates at specific sites within the liver.

Copper spreads throughout the liver and passes out into the bloodstream.

Long term copper deposition occurs in various organs throughout the body. The disease progresses during this stage possibly culminating in death if the appropriate medical treatment is not forthcoming.

Stabilization of the copper imbalance and reversal of the disease to some extent with the appropriate medical treatment.

One of the characteristic features of Wilson’s disease is the buildup of copper in the eyes. It is seen externally as a rusty-brown ring around the iris and cornea. This is known as Kayser-Fleischer rings. 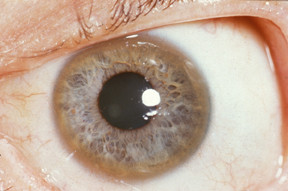 Copper toxicity has a wide range of effects on different organs and systems, not only the liver and central nervous system (CNS).

Copper toxicity can be acquired when large amounts of copper are ingested or absorbed through the skin. Even using copper pots for cooking can be a source of copper toxicity. In Wilson’s disease, the cause of the copper toxicity is due to an inherited defect in the way the body handles copper. The body retains very little copper and copper that is absorbed from the gut is usually eliminated in bile. With Wilson’s disease there is a defect in the ATP7B gene which affects the liver’s ability to excrete copper in bile. Copper then overloads the liver and eventually spreads throughout the body.

Wilson’s disease is inherited. Mutated genes are passed on from the parent to the child. It is an autosomal recessive inherited disorder meaning that two defective copies of the gene are necessary for the disease to arise – one copy from each parent. However, the parents of children with Wilson’s disease may not have the disease themselves despite carrying the defective genes (carriers).

Apart from the characteristic rusty-brown to golden-brown rings around the iris (Kayser-Fleischer rings), Wilson’s disease is difficult to diagnose solely on the signs and symptoms. Even Kayser-Fleischer rings are not overtly obvious and is only detected during an opthalmic examination. Overall Wilson’s disease is a rare condition and many other more common diseases have similar clinical features. Therefore various laboratory tests are needed.

The blood and urine can be tested to detect the amount of copper within it. Other blood tests aid with assessing the liver function or the levels of the protein (ceruloplasmin) that carries copper in the blood. While copper levels in the blood are high with Wilson’s disease, the level of ceruloplasmin is generally low.

A small sample of liver tissue can be collected (biopsy) and sent for laboratory testing to assess the levels of copper within the liver tissue. Microscopic examination will also reveal the degree of liver damage.

Genetic testing to detect the defective genes that cause Wilson’s disease helps to confirm the diagnosis. It is also useful in screening the siblings of a patient with Wilson’s disease and possibly commence with early treatment in patients who have not as yet displayed notable symptoms of the disease.

The main approach to treating Wilson’s disease is to remove the excess copper in the body (chelation therapy) and reduce the intake of copper through the diet.

Chelating agents help remove the excess copper in the body by stimulating the organs to release copper into the bloodstream. Although copper cannot be excreted to a sufficient degree through the bile as it normally would, the kidney is able to filter out the copper and pass it out in the urine. Penicillamine is the main chelating agent used in Wilson’s disease. If this is not well tolerated then trientine hydrochloride is used as an alternative.

Chelating agents may need to be used for life but in low doses (maintenance therapy) once the excess copper is excreted from the system.

Sometimes zinc acetate is prescribed when chelation therapy is not viable for long periods. Zinc acetate prevents accumulation of copper in the tissues and is an option, along with a low copper diet, in patients who cannot tolerate chelation therapy. It is important to note that zinc acetate should not be used with chelating agents.

Copper is present in trace amounts in many foods. It is not possible to avoid dietary copper altogether. However, foods high in copper should be avoided or at the very least consumed in moderation. These foods that are abundant in copper include :

Vitamin and mineral supplements containing copper should be avoided.