What is wrist arthritis?

Wrist arthritis is a condition where multiple joints that are collectively known as the wrist becomes inflamed. This leads to pain, stiffness and swelling of the wrist. It is one of the most commonly affected sites with regards to arthritis. The term arthritis literally means joint inflammation while arthralgia refers to joint pain. Sometimes there is pain in the wrist (arthralgia) but this does not mean that the joint is inflamed (arthritis). The more common type of arthritis that affects the wrist is osteoarthritis (OA) but the wrist is also a likely site for rheumatoid arthritis.

Therefore inflammation in any of these joints can be considered as wrist arthritis. Since the portion of the individual hand bones near the wrist bones also has joints (intermetacarpal joints) and so does the portion of the radius and ulnar near the wrist (radioulnar joint), these joints may also be considered as part of wrist arthritis when inflamed. 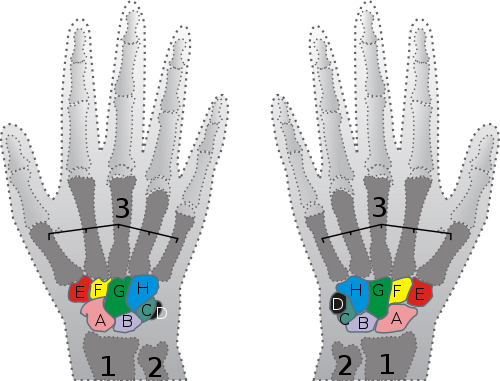 There are many types of arthritis, irrespective of the joint that is affected. Osteoarthritis (OA) followed by rheumatoid arthritis (RA) are the most common.

Osteoarthritis of the wrist

Rheumatoid arthritis of the wrist

Rheumatoid arthritis (RA) is an autoimmune condition where the body’s immune system attacks the joint lining. Inflammation is therefore a result of disordered immune activity against the body’s otherwise healthy and normal tissue. It can cause significant damage and destruction of the joint over time if it is severe and left untreated.

Other types of arthritis

Although osteoarthritis and rheumatoid arthritis are the main types, wrist arthritis may also be a result of :

Pain is often the main symptom and often the only symptom in the early stages. However, pain in the wrist joint is not definitive of arthritis. Other symptoms are usually present or diagnostic investigations need to be undertaken in order to conclusively identify wrist arthritis.

If left untreated, wrist arthritis may progress to a point where the joint becomes deformed and the flexibility at the wrist is severely impaired or lost almost entirely.

The causes of wrist arthritis are not significantly different from arthritis in other joints of the body. This includes :

The signs and symptoms alone may be sufficient to diagnose wrist arthritis. However, further investigation should be undertaken at the outset to confirm the diagnosis of wrist arthritis and establish the extent of the inflammation or tissue degeneration. These tests may include :

In rare instances, removal of joint fluid for further testing may be conducted. This is known as arthrocentesis.

The treatment of wrist arthritis depends on the type of arthritis and severity of the condition. In milder cases, conservative measures are implemented. Moderate cases of wrist arthritis may require the use of medication. Surgery is often the only option for treatment in severe or long standing cases where there is a major loss of flexibility or joint deformity.

This involves lifestyle measures and even dietary modification in the case of gouty arthritis of the wrist.

Drugs should be used in conjunction with conservative measures. Medication that may be used in the treatment of wrist arthritis includes :

There are several surgical procedures that may be considered for the treatment of wrist arthritis. Surgery is reserved for severe cases which are not responding to medication and conservative measures.