What is an insulinoma?

Under normal conditions, the pancreas stops making insulin once blood sugar becomes low. Blood sugar again rises slowly and comes to a normal level. However, in case of an insulinoma the pancreas keeps making insulin, which keeps moving sugar into the cells. Due to this, blood sugar levels drop to dangerously low levels. This can result in mild to severe symptoms ranging from anxiety and hunger to seizures, coma or death.

Insulinomas originate from insulin-producing cells of pancreas, called islet cells. The pancreas is an elongated gland located in the upper part of the abdomen. There is usually no local symptoms associated with the tumor, such as pain. 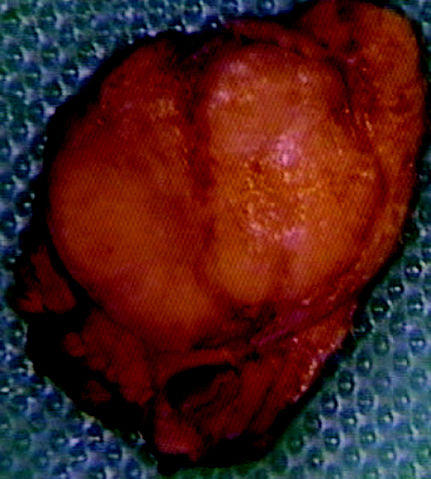 Picture of a surgically removed insulinoma sourced from Wikimedia Commons 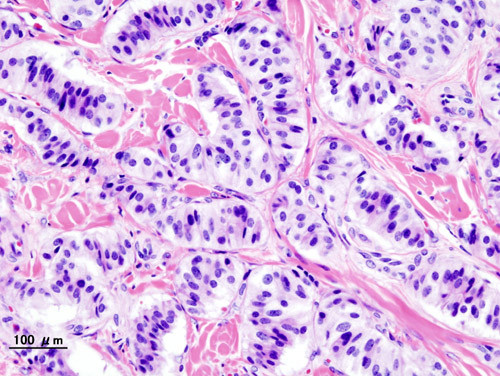 Picture of the cells of an insulinoma from Wikimedia Commons

Mostly, insulinomas prompt pancreatic islet cells to produce more insulin. However, some insulinomas can cause pancreatic cells to also secrete other hormones such as gastrin, adrenocorticotropic hormone (ACTH), 5-hydroxyindolic acid, human chorionic gonadotropin, glucagon, and somatostatin. The effects of these tumors are not only restricted to the functions of insulin.

Insulinoma may result in insulin release in short bursts. This results in large fluctuations in blood sugar levels. Over 90% of insulinomas are localized and do not spread. However, in 10% cases, insulinomas can be malignant (cancerous) and may spread. The majority of cases will have just one insulinoma. However, there may be more than one insulinoma present simultaneously. Multiple insulinomas are linked with an endocrine system disease called multiple endocrine neoplasia type 1 (MEN 1).

Patients with insulinoma show three characteristic features referred to as Whipple triad, which are:

Other symptoms may include the following:

Complications of an Insulinoma

Untreated insulinomas can lead to serious complications related to hypoglycemia. It also increases the risk of coma and of accidental falls upon fainting. However, the surgical removal of insulinoma can also lead to complications. Most common of all complications are bleeding and formation of pancreatic fistulas due to leakage. Here the pancreatic secretions leak from the damaged pancreas and result into formation of fistulas.

Due to damage to pancreas during surgery pancreatic pseudocysts may form in some patients, which can result in inflammation of pancreas (pancreatitis) or abscess formation. Removing a large portion of the pancreas may lead to decreased insulin levels as the insulin-producing cells are removed. It ultimately leads to a permanent state of diabetes mellitus.

The symptoms alone are usually insufficient to diagnose an insulinoma. Many other conditions can cause these changes in blood glucose levels that lead to the symptoms. Therefore it is important to undertake further diagnostic investigation to detect the presence of an insulinoma.

Medication for insulinomas help to limit the effects of excessively high insulin levels in the body. Hypoglycemia is one of the main concerns as the blood glucose levels can reach dangerously low levels. Therefore patients with insulinomas that cannot be treated easily need to eat frequently to prevent hypoglycemia.

A single tumor can be removed easily. However, if there are multiple tumors, parts of the pancreas are usually removed in a procedure known as a partial pancreatectomy. Total pancreatectomy, however, is avoided as at least 15% of the pancreas is needed to produce pancreatic enzymes. Surgical removal of a tumor becomes difficult if insulinomas are located in the pancreatic head, body and tail. Whipple procedure can be performed in such cases, though it does not necessarily guarantee the successful removal of the tumor.

Surgical removal of insulinomas is considered curative in 90% of patients, and is the preferred method of treatment. Open surgery or laparoscopic surgery may be performed. Patients are given diazoxide and dextrose before surgery to prevent hypoglycemia. High calcium levels can lead to complications in patients undergoing an insulinoma surgery. Hence, in MEN 1 patients the parathyroid gland is removed before insulinoma surgery, which prevents complications related with high calcium levels.

More than 95% of insulinomas are benign and harmless and their complete removal usually results in a long-term cure. However, in 5% patients, benign insulinomas may reappear few years after surgical removal. Chemotherapy results in partial response in 50% of patients and cures 20% patients completely.