How common is achondroplasia?

Achondroplasia affects nearly 1 in every 25,000 to 40,000 children. It is estimated that around 10,000 individuals in the United States and 150,000 persons worldwide suffer from achrondroplasia. It can affect all races and any gender. It is thought to account for almost 80% of the dwarfism cases in the world.

Achondroplasia is a short-limb dwarfing condition, which means that the limbs are affected more than the trunk. This is evident in patients’ sitting height, which is within the normal range. In achondroplasia, the proximal parts of limbs – the thighs and arms – are more severely affected than the legs, feet, hands, and forearms.

Cartilage is the flexible material that makes up the skeleton in infants. Over time it becomes ossified meaning that it is converted to bone. This happens over years and all bones are ossified by about 25 years of age. In patients with achondroplasia, the formation of cartilages occurs normally but the subsequent conversion of cartilage to bone is defective. This results in short limbs.

In people with achondroplasia, following symptoms are seen: 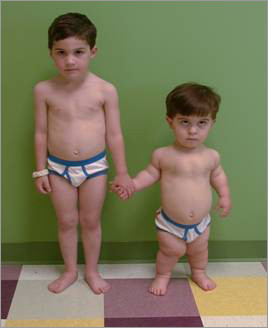 The following complications are associated with achondroplasia:

Achondroplasia can be caused by a random new mutation (in 80% cases) or through inherited defect in FGFR3 gene (in 20% cases). FGFR3 or fibroblast growth factor receptors are important for cell growth and wound healing. A mutation in FGFR3 can cause achondroplasia.

The gene responsible for achondroplasia can be passed on from parents to children as an autosomal dominant trait, which means just one copy of the defective gene, from any of the parents, is sufficient to produce the disease in the child. The disease can be transmitted in two ways:

In majority of the cases, a random new mutation in the gene causes achondroplasia. Becoming a father after 35 years of age may increase the risk of having a baby with achondroplasia.

There are various tests to diagnose achondroplasia both in the unborn fetus and in early life.

X-rays of the skull, spine, legs and arms can reveal the characteristic features of achondroplasia (like an undeveloped middle part of face, enlarged skull cap, shape of pelvis, prominent forehead, short neck of femur bone of leg, short fingers and toes, and short base of the skull).

A computed tomography (CT) scan or a magnetic resonance imaging (MRI) scan can show a narrow spinal canal. An ultrasound scan can detect limb defects only in the latter half of pregnancy.

A growth hormone called somatotropin is given to the patients with achondroplasia. The therapy works best when started as early as possible.

Most of the patients with achondroplasia report problems with the spine, which can be addressed in the following manner: