A bad body odor and small specks of what seems like skin may not seem like anything serious. Armpits are one of the smelly areas of the body for most people. Sweat, natural oils and remnants of antiperspirants often do contribute to tiny granular particles. However, the odor and particles could actually be symptoms of a type of bacterial infection of the armpit hair. It is not a serious infection and does not cause any long term complications. Nevertheless the symptoms can be bothersome and treatment may therefore be necessary.

Trichomycosis axillaris is a bacterial infection of the underarm (armpit) hair shafts. It is caused by a type of bacteria known as Corynebacteria. Tricho means hair and axillaris refers to the armpit. The term mycosis can be misleading because it implies a fungal infection but the condition is actually due to bacteria. Overall trichomycosis axillaris is a relatively common condition yet many people do not know about it mainly because it is not associated with any health risks.

The condition is usually only occurs after puberty since armpit hair becomes thick and more abundant. Men are also more commonly affected than women and it is believed to be due to the fact that more women remove their armpit hair than men. Corynebacteria are part of the skin flora. This means it is part of the naturally occurring bacteria that exist on human skin and usually do not cause any disease on unbroken skin.

Normally the population size of these different bacteria and fungi that are part of the skin flora are kept in check by a multitude of factors. However, in trichomycosis axillaris there is an overgrowth of these bacteria. Since it prefers warm moist areas, the armpit provides the ideal environment. Therefore trichomycosis axillaris is more commonly seen in people who sweat excessively (hyperhidrosis). Poor hygiene is another factor that increases the likelihood of the condition occurring. However, it can also occur in people with good personal hygiene.

Several species of Corynebacteria may be responsible although Corynebacterium tenuis seems to be the most common. There is a similar fungal infection that can affect the hair shafts and this is known as piedra. It is important to remember that fungi and bacteria are different types of microorganisms. Although trichomycosis is a bacterial infection of the hair, a fungal infection may also arise at the same time.

Trichomycosis axillaris  is largely asymptomatic. Most people never know that they have the condition. In fact medical advice is often never sought, the condition is never diagnosed and therefore never treated for years or even a lifetime. Trichomycosis does not cause any serious complications and does not adversely affect the health of a person in the long term.

Offensive smelling armpits are one of the more common symptoms. However, this is a common problem even among people who do not have trichomycosis axillaris and is usually ignored. Since hyperhidrosis and poor hygiene are some of the risk factors, it is possible that the offensive odor may be due to these reasons and not the bacterial overgrowth.

A characteristic symptom of trichomycosis axillaris is the presence of concretions around the affected hair shafts. These small particles that accumulate can vary in color. It may be red, black or yellow and appear as small nodules around the hair shaft measuring about 1 to 2 mm (millimeters). Yellow concretions seem to be the most common and can stain clothing.

An infection usually means that the microbe invades the tissue but this is usually not the case with trichomycosis axillaris. Rather it is an overgrowth of bacteria. Therefore symptoms usually associated with an infection are not present. However, there are rare cases where the bacteria do invade the hair shaft. This can cause the hair to become brittle and break off. As a result hair loss may be seen but is usually minor.

In most cases the skin of the armpits are unaffected. There is no  skin rash or other abnormality. However, there can be a chronic skin infection caused by Corynebacteria known as erythrasma that may also occur with trichomycosis axillaris. A third condition known as pitted keratolysis may also be present which is also a consequence of a bacterial infection. These three conditions are known as the corynebacterial triad.

If necessary a potassium hydroxide preparation may be done to identify the presence of bacteria. It can also be useful to differentiate and confirm the presence of fungi which have a similar appearance in a condition known as piedra. Both piedra and trichomycosis axillaris may co-exist. Although not usually necessary, a bacterial culture may be done to confirm the bacterial species involved. The treatment for piedra and trichomycosis axillaris differs since one is caused by fungi and the other by bacteria. 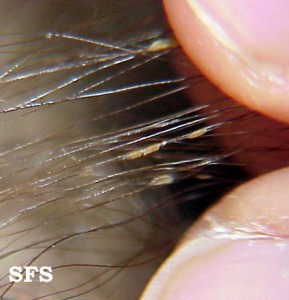 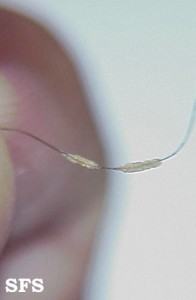 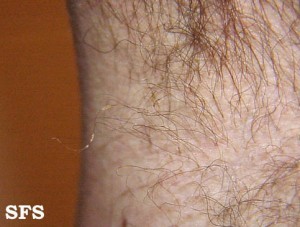 Medical treatment for trichomycosis axillaris is not usually necessary. Simply removing the affected hairs or shaving the area can treat the condition. It is the fastest way to treat trichomycosis axillaris. Antiperspirants are helpful by reducing sweat and minimizing the ideal conditions for bacterial growth. Good personal hygiene by washing the armpits thoroughly can also be helpful in preventing infections but not in treating it. Drying powders will also assist with preventing a recurrence.

However, medicated applications may be necessary for persistent or recurrent overgrowths especially if a person does not wish to remove the armpit hair. Benzoyl peroxide is a very effective application and is available as a gel or wash. It is commonly used for treating acne and to reduce the bacterial population. Topical antibiotics like clindamycin or erythromycin are also effective and should be considered if benzoyl peroxide does not yield the desired results.