The kidneys filter blood to remove wastes, excess water and micronutrients that are not needed by the body. These substances are passed out as urine. Although it is filtered from the blood, the blood cells itself do not enter the urine under normal circumstances. However, there are cases where blood may enter the urine. This may not always be visible to the naked eye but is instead detected by diagnostic tests.

There are different terms that are used to describe hematuria depending on the visibility of the blood in the urine.

Visibly discolored urine appearing red or bloody. Sometimes the urine may also appear dark, ranging from a orange-brown to yellow-brown in color. Black urine on the other hand is the presence of free heme (UK ~ haem) in the urine after red blood cells have been destroyed in the blood. While a cloudy urine is a sign of hematuria, it may also indicate the presence of pus in the urine.

This term is used to describe red blood cells in the urine without other urine abnormalities like protein in the urine (proteinuria) or urinary casts (kidney diseases).

The term benign indicates a condition that is not progressing and should not cause any serious complications. Benign hematuria may mean that it is a transient condition and may resolve spontaneously and is a term often used concurrently with essential hematuria.

Benign familial hematuria refers to a genetic type of kidney disease that begins in childhood and results in hematuria because of abnormalities in the kidney’s filtration apparatus known as the glomerulus.

This is not a term on its own but rather refers to the presence of red blood cells in the urine with no other symptoms like frequent urination, painful urination, urging or incontinence which would normally accompany a pathological urinary disturbance. 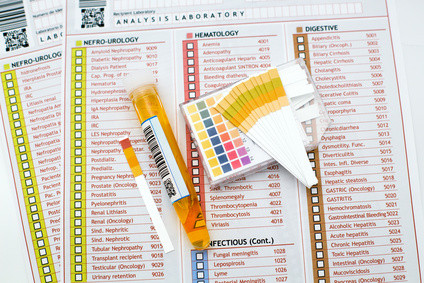 It is not always possible to identify where the bleed is occurring. It could arise from the kidney, ureter, bladder or the urethra. The detection of blood alone is therefore not sufficient. Various other symptoms that may be present must be considered. However, it is more accurate to use diagnostics investigations to identify the location of the bleed.

Bleeding in the Kidney

For blood to enter the urine at the kidney, one or more of the following conditions is usually present.

Bleeding in the Ureter

This is an uncommon location for the bleeding but it can occur. A large stone from the kidney can enter the ureter and injure it resulting in bleeding. Another possibility is where a kidney infection may spread down to the ureter. Trauma to the flanks may also involve the ureter which could lead to the presence of blood in the urine.

Bleeding in the Prostate

Bleeding in the Bladder

One of the most common sites for bleeding which leads to hematuria is within the bladder. From bladder infections (cystitis) to bladder stones, blood from the bladder wall may enter the bladder and taint the urine. The more serious and concerning cause of bleeding in the bladder is cancer. This is a common type of cancer among both older males and females.

Bleeding in the Urethra

The urethra carries urine from the bladder to the external environment. It can be easily injured and infected. In fact most urinary tract infections (UTIs) start as inflammation of the urethra and the spread to the bladder. Sexually transmitted diseases (STDs) is another possible cause. Urinary stones can also injure the urethra as it passes out.

Gross hematuria does not always mean that the urine will appear red in color. It can appear pink to orange or yellow-brown. Rarely, black urine may also be a sign of hematuria due to free heme in the urine. Sometimes the appearance of red urine or what appears to be blood in the urine is not due to blood. Instead it is a discoloration of the urine. A number of foods and drugs may cause hematuria or urine discoloration. It is often painless in these instances.

Read more on orange discoloration of the urine.