What are the bowels?

The digestive tract is made up of different parts that collectively comprise a single long cavity. There are a number of terms that are used to refer to the digestive tract and sometimes these terms are used interchangeably and even incorectly. Here is an explanation of some of the common terms.

The stomach lies right below the bottom end of the breastbone and most of it is tucked under the left ribcage. The small intestine (duodenum, jejunum and ileum) fills up the most of the abdominal cavity. The first part of the small intestine, the duodenum, starts where the stomach ends which is approximately in the upper middle region of the abdomen. It coils within the abdominal cavity and terminates at the lower right region of the abdomen where it joins the cecum of the large intestine. 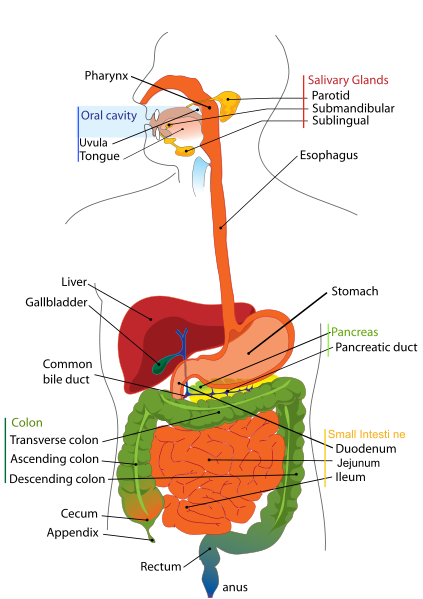 Food that is swallowed stretches the gut wall and this excites the nerves in the wall. It triggers rhythmic contractions of the smooth gut muscles that slowly push the food through the stomach, small and large intestine towards the anus. This process is called peristalsis. Food-related factors that stimulate peristalsis include food volume, temperature, bulk, liquid content, and even the predominant type of nutrient (4).

It is also known that taste can have an impact on gut motility, as do emotions, thoughts and pain. This may either stimulate or depress gut motility. This movement through the gut is also responsible for defecation. Once the end parts of the large intestine fills, the stretching of the wall stimulates the defecation reflex. Stool is pushed into the rectum and a person has an urging to pass stool.

Once a person is in an appropriate setting the internal and external sphincters relax. Strong contractions then push the stool out of the rectum and into expel it into the environment.

Although the liver, gallbladder and pancreas are not part of the digestive tract, these organs are important parts of the digestive system as a whole. Bile is produced in the liver, temporarily stored in the gallbladder, and then secreted into duodenum via the cystic and common hepato-biliary ducts. Digestive enzymes from the pancreas are passed out into duodenum via the pancreatic duct. The common hepato-biliary and the pancreatic duct join before they open into the duodenum (3). This opening, called papilla Vateri, is embraced by a smooth muscle – sphincter of Oddi.

Most nutrients, water and electrolytes (Na, K, Ca, Mg, Fe) are absorbed in the duodenum and jejunum, while vitamin B12 is absorbed mainly in the terminal ileum. Bile acids are absorbed through the entire small intestine but mainly in the terminal ileum of the small intestine. After absorption the bile is then transported to the liver where it is processed to be and may be used again.

Many bacteria (and some yeasts and protozoa) normally live in a healthy human gut; mostly in the colon, fewer in the small intestine, but none in the stomach. Newborn gets its first bacteria by swallowing them during parturition.

The composition of the gut flora differs from person to person and depends on age, diet, environment and use of antibiotics (6). Bacteria in the first part of the small intestine (jejunum) are mostly aerobic lactobacilli and enterococci, while those in the distal small intestine (ileum) and colon are mostly anaerobes (Bacteroides, Bifidobacterium bifidum,E. coli, enterococci, clostridia, anaerobic lactobacilli) (6). In breast-fed infants, Bifidobacteria predominate. Some fungi, like Candida albicans, are also a part of normal intestinal flora.