Bile is a digestive juice that is secreted by the liver and stored in the gallbladder. Excess substances that the body does not need, byproducts like bilirubin and wastes processed by the liver are passed out through the bile. It empties into the duodenum of the small intestine where it assists with the digestion of fats. Eventually the bile mixes with stool and is then passed out of the body during defecation.

However, bile is more than just a waste substance. Without bile, the body cannot digest fats properly. Furthermore the liver would not be able to expel wastes which could then accumulate in the body. Some of the conditions that are associated with bile or disruption in its production or excretion includes gallstones, bile duct strictures and various liver diseases.

For example, gallstones may form from the substance in bile such as cholesterol. However, these stones can then block the outflow of bile when it becomes lodged in the neck of the gallbladder or in one of the bile ducts. 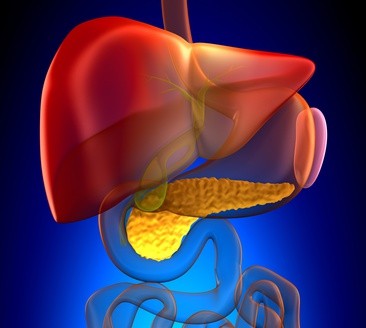 Bile is not just a waste substance. It plays an important role in digestion. Unlike other digestive secretions in the gastrointestinal tract, bile does not contain enzymes. Instead it has bile salts (acids) which can :

The other important function of bile is that it contains waste products from hemoglobin breakdown. This is known as bilirubin and is normally formed by the body as it gets rid of old red blood cells which are rich in hemoglobin. Bile also carries excess cholesterol out of the body and ‘dumps’ it into the gastrointestinal tract where it can be passed out with other waste matter.

Bile salts are constantly recycled in the body. It is secreted into the duodenum along with other compounds as bile. It binds with lipids to form micelles and eventually reenters the blood stream. By passing through the portal cirulation, bile salts enter the liver. Here it goes through the venous sinuses of the liver and is absorbed by the liver cells (hepatocytes).

It is then ready to be secreted again by the liver cells to make up bile. This allows for over 90% of bile salts to be recycled in this manner (enterohepatic circulation of bile) and after about 15 cycles, it is discarded in the feces. The liver, nevertheless, constantly produces small amounts of bile salts to replenish the amounts that cannot be recirculated.

The liver is constantly filtering the blood. It removes waste substance, neutralizes toxins, helps with the processing and storage of nutrients as well as a host of other functions. The liver cells (hepatocytes) produce bile which collects and drains into the hepatic duct. From here it can enter the small intestine to act on fats by traveling down the common bile duct, or it can enter the gallbladder through the cystic duct, where it is stored.

The liver manufactures between 600ml to 1 liter of bile in a day. As bile travels down the ducts, the lining of these passages, secrete water, sodium and bicarbonate ions into the bile, thereby diluting it. These additional substances help to neutralize the stomach acid which enters the duodenum with partially digested food (chyme) from the stomach. Refer to Gastric Acid Secretion.

The liver is constantly secreting bile, up to 1 liter in a 24 hour period, but most of it is stored in the gallbladder. This hollow organ can only hold 30 to 60 ml of bile and is able to store the large quantities of bile from the liver by concentrating it.

The gallbladder is able to achieve this by resorption of water, sodium, chloride and other electrolytes through its lining. The other constituents of bile, like the bile salts, cholesterol, lecithin and bilirubin, stays in the gallbladder. When bile is being secreted, large amounts of water are also released with it.

Bile, whether from the liver or gallbladder, contains the following substances :

Between 20 to 30 minutes after eating a meal, the partially digested food enters the duodenum of the small intestine from the stomach as chyme (gastric emptying). The presence of food, especially fatty foods, in the stomach and duodenum stimulates the gallbladder to contract due to the action of cholecystokinin (CCK). The gallbladder then forces out bile and relaxes the sphincter of Oddi thereby allowing bile to enter the duodenum.

The other stimulus for gallbladder contraction is nerve impulses from the vagus nerve and enteric nervous system. Refer to Stomach Nerves for more information on the nerve supply of the upper gastrointestinal tract.
If sufficiently stimulated for a prolonged period (due to the presence of fatty foods), the gallbladder can empty its entire contents within an hour.

Secretin, the digestive hormone that stimulate pancreatic secretion, also increases bile secretion. Its main effect, however, is to increase the secretion of water and sodium bicarbonate from the lining of the bile duct. This bicarbonate solution, along with pancreatic bicarbonate, is essential for neutralizing the stomach acid that is present in the duodenum.