Infarction is a term that is often associated with the heart. A myocardial infarction is the medical term for a heart attack. When an infarct occurs in the brain then we refer to it as a stroke. But an infarct is not only restricted to these organs. It can occur in any part of the body. The intestines (bowels) are just as prone to an infarct which can arise slowly or occur suddenly. It may not be as well known as a heart attack (myocardial infarction) but a bowel infarct can be just as deadly if it is not treated promptly.

Meaning of Bowel Ischemia and Infarct

Like every part of the body, the bowel requires a good supply of blood. Arteries carry in blood that is rich in oxygen and nutrients. This allows the cells that make up bowel tissue to maintain life processes and function as normal. Veins carry away blood that is low in oxygen and laden with wastes. If the blood supply is interrupted then living tissue will be affected. With a partial impairment in blood flow, the cells may not die immediately but it does cause inflammation in the tissue. With a complete blockage of blood flow, living tissue will die in time.

What is bowel ischemia and infarct?

Infarct simply means that tissue has died. This cannot be undone although new tissue can regenerate in some parts of the body. Ischemia means that they blood flow is inadequate and inflammation arises in the affected tissue. In that light, bowel ischemia means inflammation of the bowel (intestine) tissue due to restricted blood flow. Bowel infarction means that a portion of the bowel (intestine) tissue has died.

The term mesenteric ischemia and ischemic colitis are also used to describe bowel ischemia. The first term, mesenteric ischemia, relates to the mesentery arteries (superior and inferior) which carry blood to the small and large intestines. The second term, ischemic colitis, means inflammation of the colon (large intestine) due to restricted blood flow. Both may be termed acute or chronic. It may also be classified as occlusive (blockage within vessel) or non-occlusive, embolic or thrombotic, and arterial (artery) or venous (vein).

Ischemia and infarction are a consequence of partial to complete blockage of blood flow. Restriction in blood flow occurs for 3 main reasons in any organ:

Adhesions are scar tissue that form after surgery. The bowels are one of the most common sites for adhesion development following abdominal surgery. A portion of the intestine may become trapped and compressed in these adhesions leading to a restriction of blood flow from outside the vessel.

A hernia is a protrusion that leads to the formation of pouches. It is a common occurrence on the abdominal wall. Depending on the size and severity of the hernia, a portion of the bowel can become trapped within in. This can result in a strangulation where the blood supply is restricted from outside the blood vessel.

An embolus is any object that travels in the bloodstream to block a vessel. Most of the time it is a blood clot that formed elsewhere. It may arise in the heart or larger blood vessels, dislodge and then travel to an artery supplying blood to the the bowels. Once trapped here, it restricts blood flow and can even lead to a total obstruction. Here the restriction is from within the blood vessel. 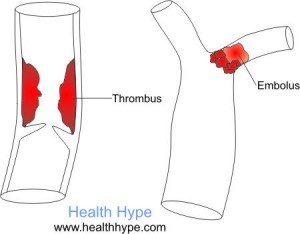 A thrombus is a blood clot that forms within the blood vessel and obstructs the flow of blood where it arises. It is more likely to occur in one of the bowel arteries if it is already narrowed, like with fatty plaques (atherosclerosis). It can also form in a vein and then prevent normal blood flow away from the bowel. Venous thrombi (blood clots in vein) is more likely to occur with blood clotting disorders and liver disease.

A narrowing within an artery may sometimes not be sufficient to impair blood flow to the point of ischemia. However, if the existing blood flow is somehow impaired in an already narrowed artery then ischemia or an infarct may occur. This can happen with very low blood pressure (severe hypotension).

The symptoms of bowel ischemia are often not specific for this condition. It may be mistaken for other abdominal and gastrointestinal conditions. Further investigations are therefore necessary to confirm the diagnosis.

Many of these symptoms are similar to acute digestive conditions like gastroenteritis, although the abdominal pain is notably severe without tenderness over the area when touched.

The more definitive means to diagnose bowel ischemia or an infarct is through various diagnostic investigations. However, even these tests and scans may not always be accurate. It is often conducted to rule out other bowel disorders that may present with similar symptoms as ischemia or an infarct.

Surgery is usually necessary. Sometimes exploratory surgery may be done to diagnose the condition where the diagnostics investigations mentioned above fail to do so. Certain drugs can be used particularly during an angiogram and it can be lifesaving.

Surgical procedures may only be considered once a patient is stabilized. The procedure depends on the extent of the condition. Angioplasty and stenting may be considered in certain instances. Here a balloon at the end of a catheter is inserted into the blood vessel where the problem lies. The balloon is inflated and stent is inserted. If there is death of bowel tissue then this portion may be surgically removed and the two healthy ends surgically reconnected. Sometimes a colostomy or ileostomy may be necessary. This can be either short term or permanent.