Parts of the Large Intestine 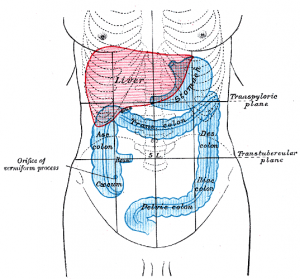 Parts of the Colon

As mentioned, the colon is only one part of the large intestine. The colon itself can be divided into four parts based on its location and orientation:

The signs and symptoms of the various diseases involving the large intestine are largely the same and can be difficult to differentiate. These symptoms include:

Other symptoms like nausea, vomiting and fever are non-specific and may only arise in certain large intestine diseases. For example. fever may be a sign of an infection.

Diseases of the Large Intestine

Colorectal cancer is one of the most common types of cancers globally. It arises when cells in the colon or rectum become abnormal and start multiplying rapidly. These malignant (cancerous) growths damage healthy tissue and can spread to other parts of the body. Sometimes cancerous cells from elsewhere in the body can spread to the colon and rectum where it causes cancer.

Read more on types of colitis.

Diverticula are abnormal pouches that form in the wall of the colon. These pouches may not cause any signs or symptoms until it becomes infected. The infection of these pouches is known as diverticulitis. Diverticulosis (formation of diverticula) and diverticulitis is more common in older people and particularly among smokers, people who are overweight or obese, live a sedentary lifestyle and consume a low fiber diet.

Inflammatory bowel disease (IBD) is a disorder where the immune system attacks the wall of the digestive tract, particularly that of the bowels (intestines). This causes inflammation and even the formation of open sores (ulcers) with a disruption of normal bowel activity. Of the two types of IBD, ulcerative colitis is limited to the colon whereas Crohn’s disease can affect part of the digestive tract, even without any large intestine involvement.

Irritable bowel syndrome (IBS) is not conclusively linked to the bowels (intestines) alone. The exact cause is unclear and several mechanisms have been proposed. There is no clearly identifiable pathology (disease process) that can be isolated in IBS. It appears to be due to abnormally rapid or slow movement through the bowels. This gives rise to abdominal pain and alterations in bowel habit (constipation, diarrhea or a combination of both).

Ischemic colitis is one type of colitis (colon inflammation) which occurs when the blood flow to the colon is reduced. This leads to insufficient oxygen supply to the colon tissue. It arises when the blood vessels become narrowed or even blocked. Ischemic colitis is more likely to occur in older people, after abdominal surgery and in people who are at risk of atherosclerosis (fatty plaques developing in the artery walls).

Megacolon is an abnormal widening (dilatation) of the colon. It arises when there is weakening, paralysis or dysfunction of the muscles in the colon. This results in the backing up of the contents of the colon and stretching of the colon wall. Megacolon can be acute or chronic. In terms of the latter, the dilatation may be present from birth (congenital), develop in life (acquired) or occur for unknown reasons (idiopathic).

Colonic polyps are outgrowths that protrude from the colon wall. Most of these growths are benign (non-cancerous) but some polyps have the potential to become malignant (cancerous). Polyps may not cause any symptoms unless it becomes large or there are multiple polyps in a small area of the colon.

Polyps are a result of disturbances in the genes that control cell growth. Certain risk factors increase the likelihood of colon polps, such as being over the age of 50 years, consuming alcohol and tobacco, a family history of colon polyps and having conditions like type 2 diabetes and inflammatory bowel disease (IBD).