What is cubital tunnel syndrome? 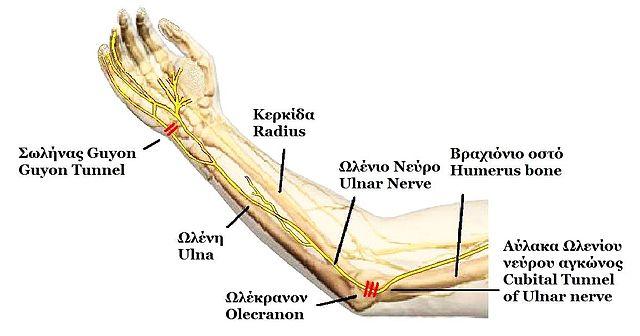 The ulnar nerve can become irritated or compressed for various reasons. Irritation is more likely to arise with prolonged stretching of the ulnar nerve. Normally the nerve is able to stretch for short periods of times when the elbow is bent. Compression of the nerve tends to occur when the tissue around it presses on the nerve, usually with swelling or enlargement of this tissue. This can occur with injury of the surrounding tissue and elbow dislocation. However, the exact cause of cubital tunnel syndrome is not known.

Effects on the Nerve

Since the ulnar nerve is responsible for the sensory function of the little finger and half of the ring finger, all the way to the back of the palm, any disturbance of the ulnar nerve affects sensation in these areas. Furthermore the ulnar nerve and its branches supply different muscles in the forearm and hand (motor function). In cubital tunnel syndrome the motor activity will therefore also be affect evident by the muscle weakness seen as a partial loss of grip strength.

The main sensory symptoms are tingling and numbness, which patients often describe as the hand falling asleep. These disturbances in sensation (paresthesia) are usually triggered by or worsened during prolonged bending of the elbow. Action that require repetitive bending and straightening may also trigger episodes of tingling and numbness.

Pain is usually felt at the elbow where the nerve is irritated or compressed. It often occurs simultaneously with tingling and numbness of the the fingers. The elbow pain can radiate up or down the arm from this point. The pain may vary in nature to some degree but typically feels like the “funny bone pain” a person experience when striking their elbow against an object.

The grip strength is usually diminished to some degree in cubital tunnel syndrome. There may also be some difficulty in coordinating movement of the little finger in particular. It may not always be obvious to the patient and instead noticed as clumsiness with a tendency to drop objects that are being grasped. A person may not be able to pinch “as hard” as they could.

In very severe and prolonged cases, there may be muscle wasting and a clawing of the little finger. This is rare. Muscle wasting is irreversible.

Irritation and compression of the ulnar nerve at the elbow tends to occur in the following instances :

Despite these possible causes and risk factors, sometimes cubital tunnel syndrome arises without any clear explanation for the cause of the condition.

Cubital tunnel syndrome may be diagnosed by the findings of a physical examination along with a medical history indicating the typical symptoms of localized tingling and numbness along with a weakening of the grip in the affected hand. Clinical examination by a doctor will assess the onset or worsening of symptoms with bending the elbow or tapping (Tinel’s sign) on the ulnar nerve at the elbow.

Imaging studies like an x-ray and MRI (magnetic resonance imaging) scan will visualize any compression or narrowing. An electromyography (EMG) may help to assess muscle strength. A nerve conduction study (NCS) may also be conducted for diagnosis of cubital tunnel syndrome. Both an EMG and NCS are helpful in assessing the severity of the condition and subsequent improvement with treatment.

The key to treating cubital tunnel syndrome is to reduce the activities that exacerbate the condition. However, this is not often possible with occupational hazards. Initially, immobilizing the arm at night an be done with splinting or padding. This prevents a person from keeping the elbow bent while asleep. Should night padding and splinting not provide some relief along with medication then daytime immobilization may also be considered for as long as 3 weeks.

The two main types of drugs used in the treatment and management of cubital tunnel syndrome includes :

Medication on its own may not be sufficient without making lifestyle changes and immobilizing the elbow joint for a period of time until inflammation subsides. Should it not be effective, surgery is then considered.