Physical activity is one of the recommended lifestyle measures for good health but diarrhea after a workout can be distressing. It is not entirely uncommon to have the urge for a bowel movement after exercise but diarrhea is not considered as a normal bowel habit. Fortunately most cases of diarrhea after exercise are never serious and tends to resolve on its own within a short period of time. However, sometimes the exercise could have triggered or exacerbated an underlying health problem that may be the cause of your diarrhea. This health problem needs to be investigated and treated appropriately.

What is Runner’s Trots?

Runner’s trots, also known as runner’s diarrhea, is the most well known type of exercise-related diarrhea. It occurs during or immediately after running and is most frequently seen in long-distance runners.  But it can also occur among walkers especially with high speed walking and long-distance cycling. The exact cause is unknown despite several theories as to why it may occur.  Apart from the physical strain on the body, runner’s trots may also be associated with anxiety and possibly even underlying bowel conditions that are exacerbated by stress, such as irritable bowel syndrome. 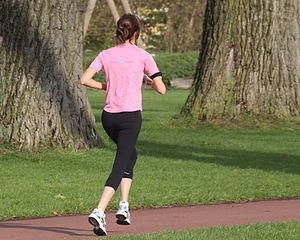 It is important to understand what the term diarrhea means. Diarrhea is having three or more bowel movements in a day with the passing of loose and sometimes watery stool. It may also include passing more than 300 grams or 300 milliliters of stool daily. Frequency alone may not always be an indication of diarrhea. Some people tend to have more frequent bowel movements than others. But if the change in bowel habit is uncharacteristically frequent and the stool is loose or watery then it should be considered as diarrhea.

As with runner’s trots, the exact cause of exercise-related diarrhea is not fully understood. It may be due to the same possible mechanisms as runner’s diarrhea but there may also be other factors involved that is not as likely to occur with running, as compared to other types of exercise. The odd incident of exercise-related diarrhea that is short-lived is not usually a cause for concern, but persistent diarrhea or diarrhea that occurs after every workout needs to be investigated further.

The diarrhea may arise from the shaking of the gastrointestinal organs during walking or running. The movement itself may stimulate defecation or it may speed up movement of food within the bowels and impede digestion. The combination of partially digested food and water that is not reabsorbed as it should may contribute to diarrhea. Furthermore contraction of the abdominal muscles may increase intra-abdominal pressure which may further contribute to initiating the defecation reflex or stimulating bowel movements.

The increased demand for oxygen and nutrients by the muscles being utilized during a physical workout means that blood flow is rerouted to these areas. As a result some of the blood flow to the gastrointestinal tract is reduced. It is this reduced blood supply that is believed to be part of the reason for diarrhea during strenuous physical activity like long-distance running, cycling or fast walking. The diarrhea may be more likely to occur if a meal was consumed a short while before starting exercise.

There are several nerve reflexes that coordinate different activities in the bowels. Some of these are responsible for bowel movements and are known as the defecation reflexes. Some of these reflexes may also be linked to activity in other organs outside of the gastrointestinal tract, and it can also be influenced by the central nervous system. The host of physiological changes with strenuous physical activity may therefore stimulate one or more defecation reflexes and possibly contribute to short term diarrhea after exercise.

Hormonal changes associated with strenuous activity may also play a role in diarrhea after exercise. This may include the changes in intestinal or digestive hormones, and hormones that have a systemic effect. Bowel activity may sometimes be suppressed for short periods during exercise only to become exacerbated afterwards. This could be associated with rapid gastric emptying of a meal that is eaten immediately after exercise.

Energy Drinks and Other Fluids

In combination with the possible mechanisms mentioned above, consuming fluids with high concentrations of solutes may draw out water into the bowels and hamper reabsorption of water. This could contribute to osmotic and secretory diarrhea. Many sports drinks have high concentrations of solutess and even some stimulants like caffeine which could further speed up bowel movement. Suddenly consuming large amounts of fluid after dehydration from exercise could further contribute to diarrhea.

Anxiety and psychological stress are well known causes of acute diarrhea. It may occur in competitive sports in particular as there is anxiety about performance prior to the event and psychological stress during the event. Ongoing stress and anxiety after the event may also be a contributing factor for diarrhea after exercise, particularly in professional athletes. This type of anxiety-related diarrhea can occur even before the event commences.

Exercise-related diarrhea is not usually a serious condition. If not managed properly, it can quickly lead to dehydration since there would have already been water and electrolyte loss during strenuous physical activity. Diarrhea that is persisting for more than 48 hours, where there are signs of dehydration evident, and vomiting which does not allow for adequate fluid administration then requires prompt medical attention. However, mild cases can be managed conservatively at home with simple diet and lifestyle measures.

Always consult with a doctor if you are in doubt about your symptoms. Otherwise consider these simple remedies: