Can facial numbness or pain arise from a bulging disc ? Yes.

It is interesting to note, that cervical disc bulges can also lead to facial symptoms (1). It is frequently seen as neck pain involving the shoulder and also extending to the face. However, sometimes it may even occur without any neck involvement. Earlier it was thought to occur due to an overt sensitivity of the patient. Sometimes it was even considered that the patient is feigning the pain for better insurance claims. And thus, the patient had to unnecessarily suffer an emotional predicament in making people believe that he/she does suffer from pain. And this was even after the cause of the disease (bulging discs), had already been seen on MRI but frequently ignored by physicians as normal. However, it has been documented in many research papers, that bulging cervical discs can cause facial pain, tingling or numbness along with neck pain or even without it. This is called cervicogenic facial pain.

Causes of Facial Tingling and Numbness

Tingling and Numbness in the Face and Back of the Head

The trigeminal nerve arises from the mid-brain or brain-stem (Picture 1), which is located above the spinal cord. But the nucleus of this nerve (area from where the nerve fibers forming the nerve originate), extends from the brain-stem down to the third cervical segment of the spinal cord (C3). It is surrounded by the ganglions of the spinal nerves and is known to interact with these cells (Picture 2). This functional interaction is responsible for the to and fro referral of painful sensations from neck and face. This can even result in headache, which is referred as cervicogenic headache (1). 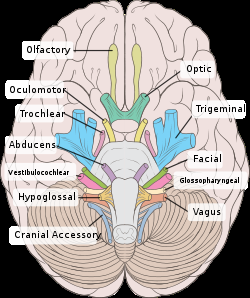 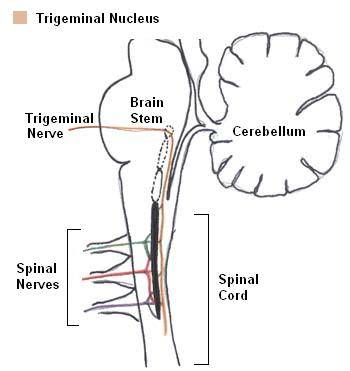 These interconnections (Picture 2) lead to partial transmission of facial sensations through the cervical nerve roots. Thus, when the cervical roots are compressed the pain is partially referred to the face. This is especially true in combined neck and facial pain. They have a typical pattern, with initial neck pain, which later on involves the shoulder and facial regions. The reason for this being spatial summation, which increases the area of referred pain over time (by recruiting additional nerve cells), to involve even those areas which are least innervated by the cervical nerve fibers like the face.

Cervical spine involvement in the form of prolapsed or bulging disc (slipped disc), spondylosis (arthritis), spondylolisthesis (slipped vertebra), osteoarthritis, or canal stenosis, can all lead to pressure on the cervical spinal segments, which is transmitted to the trigeminal nucleus because of the interconnections. Sometimes, in severe stenosis of the spinal canal there is direct pressure on the trigeminal nucleus, leading to facial tingling, numbness, or pain. Cervicogenic facial pain is usually unilateral, but can affect both sides too. Posture and neck movement plays a major role in the generation of this type of pain (1).

Treatment of Cervicogenic Facial Pain discusses the various treatment options that can effectively help to control this disease.

(1)  Cervicogenic Headache: A Review of Diagnostic and Treatment Strategies