Where Does S. aureus Live?

Primary reservoir for S.aureus (including MRSA) is a human. Staph is common in cows (mastitis), poultry, and pets (dogs, cats). In Canada, they have found MRSA in pigs (1).

How Is Staph Infection Spread

Staph may spread from one skin location to another (auto-infection), for example, by picking the nose followed by scratching the skin, or by clothes. Person to person spread is possible via skin-to-skin contact, or with sharing toys, towels, sport equipment, public showers, sauna or swimming pools. An infection may also be spread by healthy staph carriers, especially by health personnel. Staph may spread from human to dogs or other pets and then back to the human (2). S. aureus may be found on the skin, hair, nostrils or saliva of dogs. Severe staph endocarditis was reported after a minor dog bite (3). Infection by milking a cow having staph mastitis is possible (4). Staph food poisoning may occur after ingesting food contaminated with staphylococci, released from an infected food worker.

Entry points of staph infection are:

Staph can survive on domestic animals such as dogs, cats and horses, and can cause a bumble-foot in chickens and mastitis in cows. When bacteria enter the milk or meat, they multiply and release toxin. Food poisoning is possible even with cooked milk, ice-cream, or smoked meat, like salami, since S.aureus toxins are not destroyed by heat.

Who Is at Risk to Get Staph Infection?

1. Obtaining a Sample of Infected Tissue

For a diagnosis of staph infection, a sample of an infected lesion (nasal secretion, pus, blood, cerebro-spinal fluid, urine, cell aspirate from lungs or bone) has to be obtained. Symptoms of staph infections are often caused by toxins, released from only few staphylococci, so a culture of obviously infected lesion may be negative! From this reason, samples from more than one lesion has to be provided, if possible.

A clinical sample is placed on a slide and rinsed with:

After this procedure, S.aureus and other staphylococci should be blue, purple or violet under the light microscope, what is noted as Gram-positive (Gram +), (Picture 1). Bacteria that are colored light pink are noted as Gram negative (Gram -), (1). Gram staining is performed only, when mixed infection with Gram + and Gram – bacteria is expected. 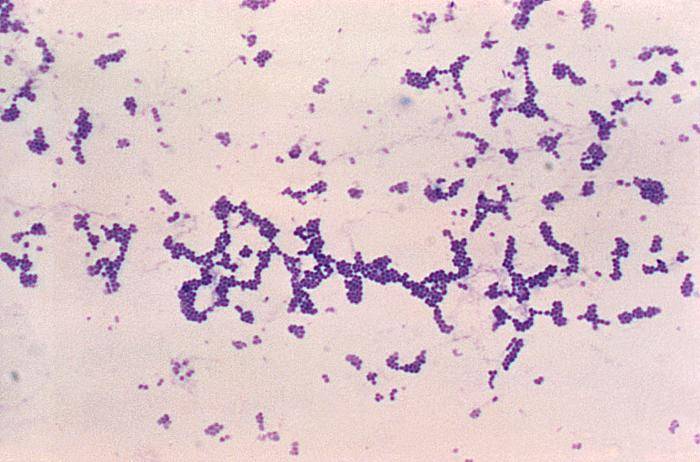 When staph is expected, a part of a medical specimen is spread over the trypticase soy agar (TSA) with 5% sheep blood (BAP = blood agar plate), (2). On such agar, S.aureus forms golden yellow colonies (cream white to orange), (3), while S.epidermidis forms white colonies (Picture 2). Culture usually needs 16-18 hours to grow (up to 48 hours for blood culture) at 35°C (4). S.aureus is usually hemolytic on sheep blood, and S.epidermidis is not. In mixed specimens, containing Gram + and – bacteria, a Columbia agar based CNA plate (colisitin/naladixic acid) to suppress Gram negative growth may be used. a) Catalase test is performed by adding 3% hydrogen peroxide to a colony on agar. Staphylococci contain catalase, and break down peroxide, produces O2 and bubble, so they are catalase positive, what distinguish them from streptococci. Catalase test is done only when a culture is not typical.

b) Coagulase test. S.aureus (and S.intermedius, which is not pathogenic for human) causes coagulation (fibrin clot) of a rabbit plasma, so it is coagulase positive, which distinguish it from all other staphylococci. In latex agglutination test (slide test), latex particles covered with fibrinogen and IgG are used. IgG antibodies bind with coagulase on S.aureus, what results in latex particles clumping in about 20 seconds (5). This slide test may be negative in a small percent; in this case a tube test, which detects both free and bound coagulase, has to be performed (5). About 97% of human S. aureus isolates possess both forms of coagulase (6).

c) Hemolysis. S.aureus causes hemolysis on a blood agar, but S.epidermidis does not. Some S.aureus strains are not hemolytic though (7).

In clinical samples, S.aureus is present in quantities not sufficient to be exactly determined by any testing method, so bacteria have to be multiplied by culturing, what usually takes 1-4 days. With a PCR, a few million of copies of S.aureus DNA can be obtained directly from a clinical sample (no culture needed) within a few hours.

A sample of staph DNA, polymerase – an enzyme needed for DNA duplication, a sequence of nucleotids (primer), needed for the start of duplication, and a large amount of free nucleotids are needed for PCR. Polymerase is obtained from a bacterium Thermus aquaticus (Taq polymerase). All components are added into a testing tube, which is put into a thermal cycler. After some PCR cycles, agarose gel electrophoresis and southern blotting technique are used to determine if obtained DNA is S.aureus DNA (8).

Kits for detection of various species of staphylococci or their toxins from human tissues, food, cow’s milk, water, and other environmental sources, are commercially available.

Xpert™ MRSA/SA-Blood Cultures (BC) and Xpert™ MRSA/SA-Skin and Soft Tissue Infection (SSTI) tests are able to simultaneously detect MRSA and  S.aureus directly from blood cultures and samples of infected soft tissue, using PCR. Both tests give results in approximately 50 minutes (10).

Foodmay be tested for staph enterotoxins by ELISA. Presence of S.aureus bacteria in the food may be confirmed  by TAQMAN (PCR), or Slidex Staph Kit (latex agglutination) (11).

Water, in order to be tested for S.aureus, is filtered and then the filtering membrane is put on modified mannitol salt agar for culturing (14).

S.aureus from an infected lesion has to be cultured on a solid medium and then appropriate suspension prepared from few grown colonies. Suspension with bacteria is swabbed over a Mueller-Hinton agar (picture 3), (15). Discs impregnated with various antibiotics are placed onto agar and incubated for 24 hours at 35 °C. Zones of inhibition of bacterial growth, measured around discs, should be compared with those in the National Committee for Clinical Laboratory Standards (NCCLS) Document M100 (M2). Results obtained may then be reported as resistant, intermediate or susceptible. 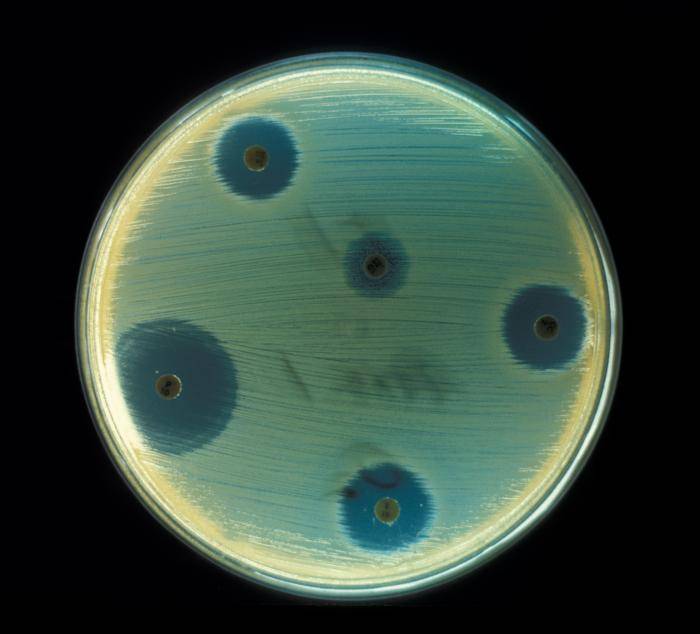 Below are three examples of Microbiology Report, filled by microbiologist after laboratory testing, and sent back to the patient’s doctor.

a) Report for a drainage from a skin carbuncle, infected by S. aureus:

*MIC (Minimal Inhibitory Concentration) = the lowest concentration of antimicrobial agent that inhibits the growth of the microbe. MIC is determined by adding increasing amounts of antibiotic (titration method) to medical sample.
**SENS = sensitivity; S = sensitive, R = resistant.
*** Bacteria in above sample were susceptible to oxacillin, so this is methicillin susceptible SA (“normal” SA). To determine methicillin resistance, oxacillin is used instead of methicillin, because methicillin is no longer commercially available in the United States, and because oxacillin maintains its activity during storage better than methicillin (16).

b) Report for blood, infected by MRSA:

* High dose of oxacillin was needed to inhibit bacteria, so this is considered as a methicillin resistant staph – MRSA.

*In staph colonization there is no inflammation, so no white blood cells are found under the microscope.
Related Articles: