What is Legionnaire’s Disease?

How Common is Legionellosis?

Legionnaires’ disease occurs worldwide. It is one of the most common infectious diseases acquired in the community, though sporadic cases are also reported. In the US, up to 18,000 cases of Legionnaires’ disease are reported per year. It often causes severe pneumonia in patients. Males and elderly persons carry a greater risk of contracting Legionella infection.

What Happens in Legionellosis?

The Legionella bacterium is a tiny, waterborne bacterium that cannot move (non-motile).  Legionella infection is acquired by inhaling mist from water sources contaminated with the bacterium. Contaminated showers, whirlpools, cooling towers, ice machines, roadside puddles, potting soil, or compost can produce Legionella containing mist. Direct inhalation of mist from such sources is a very frequent method of transmission. The bacteria replicate inside the lungs.

The first symptoms of Legionella bacteria after the incubation period includes :

Within 48 to 72 hours of the appearance of the first symptoms, the following symptoms develop:

Majority of the cases of Legionnaires’ disease are caused by the L. pneumophila but there are many other species of the Legionella bacteria can also be responsible. Legionella bacteria can survive and thrive in all kinds of indoor water systems (such as air conditioners, hot tubs, plumbing systems, and mist sprayers in grocery stores). The water droplets need to be airborne for it to inhaled and then infect the lung tissue. 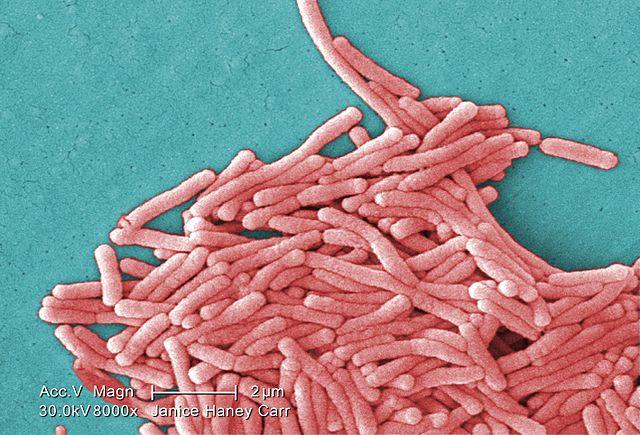 The infection spreads through mist containing Legionella bacteria. People can easily become infected by inhaling the microscopic water droplets from faucets, showers, or whirlpools. Water dispersing through ventilation systems in large buildings may also be contaminated with Legionella bacteria. Cooling towers in air conditioners are an example. Physical therapy equipments, swimming pools, decorative fountains, and water systems in hospitals, hotels, and nursing homes, can all have Legionella contamination.

Apart from water droplets, Legionella bacteria can sometimes be transmitted by:

Who is at Risk?

The following factors increase the risk of developing Legionnaires’ disease:

Legionnaires’ disease causes symptoms that resemble those of other types of pneumonia. Therefore further diagnostic investigations are recommended.

If untreated, Legionnaires’ disease can lead to life-threatening complications like:

If there is a severe, sudden drop in blood pressure due to overwhelming Legionella infection, vital organs like the kidneys and brain get less blood. The heart pumps more blood to compensate the situation. This extra workload weakens the heart and results in further reduction in blood flow.

The kidneys may suddenly lose their ability to filter waste material from the blood. This increases the accumulation of fluids and wastes to dangerous levels.

In people with weak immune systems due to some diseases or medications, Legionnaires’ disease may be fatal. Such cases need effective and prompt treatment.

The milder form of Legionnaires’ disease, i.e., Pontiac fever, generally goes away on its own and does not require medical treatment. Full blown Legionnaires ‘disease, however, requires immediate treatment.

How to Prevent Legionellosis

Outbreaks of Legionnaire’s disease can be prevented by thorough cleaning and disinfection of water bodies like pools, water distribution systems, and spas.