With new viral outbreaks like SARS (2002-2004) and the swine flu (2009) suddenly causing multiple deaths across the globe, any new virus that emerges among humans is naturally a cause for concern. One of the more recent such viruses is MERS (2012). It has some similarities to SARS and like other viruses it has been traced to almost every continent largely due to the ease of global air travel. The MERS outbreak seems to be waning but it has already caused close to 500 known deaths worldwide.

Middle East Respiratory Syndrome (MERS) is a viral infection that causes severe respiratory illness like pneumonia. The virus that causes MERS is similar to the common cold and SARS but MERS is a separate illness. It derives its name from the area where it originated – the Middle East. Although it was first identified in Saudi Arabia and subsequently reported in surrounding Middle Eastern countries, MERS has infected people and taken lives in many countries such as South Korea.

As with SARS, it appears that MERS originated from animals. It appears that it is somehow transmitted to humans from these animals, which are believed to be dromedary camels. The virus may also be transmitted from person to person. While the fatalities from MERS has drastically decreased in July 2015, it is still a cause for concern as there is no way of knowing when it could cause a global outbreak. Furthermore treatment options are limited and the over 30% of those infected eventually died thereby making it quite a deadly infection.

Middle East Respiratory Syndrome is caused by a coronavirus known as MERS-CoV. The virus most likely enters the body through droplet spread when a person with the infection coughs or sneezes and releases microscopic droplets into the air. The virus in the droplets can then then enter immune cells where it replicates and stimulates these cells to cause inflammation. This inflammation is severe and it may also cause damage to the tissue in the affected area. Since the respiratory system is primarily affected, the infection presents with pneumonia.

The exact origin of the MERS virus is not conclusively known. It appears to be a zoonotic infection meaning that it started in animals but eventually crossed over to infect humans. Initially it was though that bats were the reservoir for the MERS virus but new evidence suggests that it may instead by dromedary camels. This explains why MERS was first seen in the Middle East where there is a large number of camels. It is possible that both bats and camels may be involved as straines of MERS-CoV has been identified in both animals.

How is MERS spread?

MERS is most likely spread through infected droplets just like how other viruses in the coronavirus family are spread, most notably the common cold and SARS. The exact route of transmission of the virus is not as yet clear. It is possible that it is spread from person to person which can explain why health care workers who came in contacted with the infected were subsequently infected themselves. However, the virus does not spread as easily between humans unless a person has close contact with an infected person for a period of time.

Which countries are affected?

While MERS appears to have originated in the Middle East, the infection is not isolated to countries in this region. MERS has reached several countries across south Asia, Europe and also in the United States but as yet there are no confirmed cases in South America, Australia or most of Africa. However, it is possible that the infection may not have as yet been diagnosed in people within these countries who have fallen ill or died. Due to its nature of spread and the ease of distribution due to global air travel, it is safe to assume that MERS could be in just about any country. 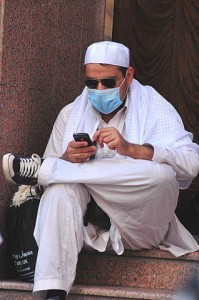 The signs and symptoms do not start immediately after infection. It takes about 5 to 12 days for the symptoms to appear from the time of infection. This is known as the incubation period and during this time the virus replicates in the body. The symptoms of MERS is not significantly different from other viral infections like the flu. In fact many people mistaken MERS for a cold or the flu at first but unlike these infections, MERS causes a severe and serious illness which can turn deadly.

Although the MERS virus mainly affects the respiratory system and to some extent the gastrointestinal system, it can cause multi-organ failure. Apart from pneumonia and respiratory failure, kidney failure and blood disorders have also been observed.

Is there a cure for MERS?

There is no cure or vaccine for MERS. Treatment of MERS is primarily supportive. This includes measures such as adequate fluid intake or IV administration, medication for pain and fever and mechanical ventilation if necessary. Antiviral drugs that may be effective for other viral infections are not as yet approved for MERS because it does not seem to be effective in eradicating the infection.

The mortality rate is high in MERS infection. Globally this rate is around 30% but in Saudi Arabia it is above 40%. This means that 3 to 4 our of 10 people who contract the infection will diet. People with other conditions like poorly managed diabetes are at greater risk of severe complications and death from MERS.

How can MERS be prevented?

Although MERS does not seem to be passed from person to person other than with close contact, it is nevertheless advisable to take measures that are useful in preventing most infections that are transmitted by droplet spread. This includes: