The lungs are the largest organs in the chest (thoracic) cavity. Most of us associate chest pain on the sides with the lungs. Central chest pain is thought to be due to the heart. However, this is not always the case. The lungs extends from the sides to the center of the chest. Therefore lung pain can be felt anywhere in the chest.

The airways which connects to each lung runs down the middle of the upper chest from the neck. Conditions that affect the airways can also affect the lungs and vice versa. Therefore chest pain that is associated with coughing and other respiratory symptoms may not be due to the lungs but from the lower airways. It can be difficult to differentiate lung pain from lower airway pain. Therefore it may be referred to as respiratory pain.

One of the main concerns with chest pain is whether the pain arises from the heart. It can be serious and even life-threatening. Heart pain or cardiac pain is usually centrally located – this means it is in the middle of the chest. However, airway pain and lung pain can be central in some cases. Heartburn which is the central burning chest pain caused by acid reflux can also be mistaken for cardiac pain or lung pain.

Reflux is usually the least serious cause. The most likely differentiating factor is if the pain is relieved with an antacid then it is most likely heartburn (acid reflux). Nevertheless it is important to seek medical attention. Further diagnostic investigations may be necessary to differentiate lung, esophageal and heart pain. 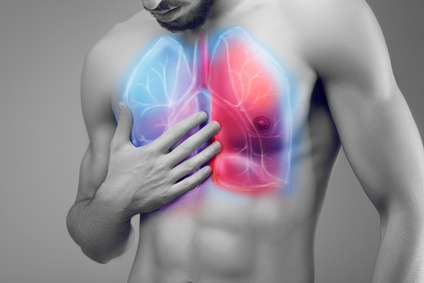 Other symptoms should also be considered when there is chest pain. The following warning signs and symptoms are more likely to be due to heart (cardiac) pain and requires immediate medical attention.

The most common causes of pulmonary chest pain is a result of pathology within the lungs although conditions affecting the air passages may also cause chest pain. Lung chest pain may either be one side or affect both sides simultaneously and some of the common symptoms that occur along with the chest pain includes shortness of breath, abnormal breathing sounds and/or coughing.

Asthma is the inflammation and narrowing of the bronchioles which are the small tubes that empty air into the lung sacs. Chest pain is not a common symptom of asthma but may occur in severe or prolonged attacks of asthma (status asthmaticus). Other symptoms of a severe asthma attack include difficulty breathing which is not relieved by change in position or medication, tight chest pain, wheezing, difficulty in coughing, blue lips, dizziness and fainting spells. 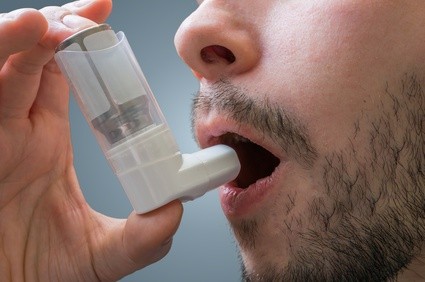 Bronchitis is the inflammation of the lining of the bronchi. These tubes branch from the trachea (wind pipe) and further subdivide into bronchioles. Bronchitis may be acute or chronic. Acute bronchitis is often due to an infection, especially a secondary bacterial infection which may occur after the seasonal flu (influenza) or a common cold.

Chronic bronchitis tends to occur in long term smokers and is a type of chronic obstructive pulmonary disease (COPD). Both types of bronchitis will cause persistent coughing with intermittent chest pain that is aggravated by the cough. A fever may also be present in acute bronchitis due to an infection.

Some of the common symptoms of a pulmonary embolism includes shortness of breath (dyspnea), coughing, wheezing, increased heart rate (tachycardia), dizziness and/or fainting spells, sweating and pallor. A pulmonary embolism may be mistaken for a heart attack (myocardial infarction).

Pleurisy is the inflammation of the lining of the lungs (pleura) and is also known as pleuritis. There are two layers of the pleura, one of which surrounds the lung and the other that lines the chest wall. Some of the causes of pleurisy include respiratory tract infections, cardiac failure, smoke or toxic gas inhalation, trauma of cancer of the lung or pleura.

The symptoms of pleurisy include a sharp, stabbing pain that is aggravated when breathing. There may be shortness of breath as well as abnormal breathing sounds due to fluid accumulation between the pleura (pleural effusion).

Pneumonia is the inflammation of the lungs usually caused by an infection or due to aspiration of gastric contents into the lung. Infectious pneumonia may be due to a bacterial or viral infection although fungal pneumonia may occur in people with a weakened immune system.

Aspiration pneumonia can arise with choking, repeated vomiting or severe gastroesophageal reflux. Signs and symptoms of pneumonia may include a productive cough (mucus, sputum or phlegm), shortness of breath, fatigue and chest pain that aggravates with breathing. Fever and chills are seen with infectious pneumonia.

Tracheitis is the inflammation of the trachea (wind or air pipe) usually due to an infection. The most common cause of tracheitis is a secondary bacterial infection that follows a viral infection such as the seasonal flu or common cold. Overall tracheitis is a rare airway disease, unlike infections higher up the tract (laryngitis) or lower (bronchitis). Other symptoms of tracheitis include a deep, hoarse cough, fever, difficulty breathing and stridor.

A pneumothorax or ‘collapsed lung’ occurs when air enters the space between the lung and chest wall. There are different types of pneumothorax caused by a range of factors including trauma to the chest wall, emphysema, tuberculosis (TB), pneumonia, lung cancer, cystic fibrosis and forced or unusually deep inhalation. The signs and symptoms of a pneumothorax include diminished or abnormal breathing sounds usually on one side of the chest, sharp or tight chest pain and shortness of breath.