Mucus is naturally produced by mucous cells that are present in the linings of various tracts and cavities in the body. One of the main reasons for this mucus is provide moisture and lubrication although it may have additional purposes like trapping dust and microbes (airways). Normally mucus is clear to slightly opaque but there are various reasons why mucus may become discolored.

Phlegm may be clear (white), yellow/green, brown, grey, black, pink, orange, containing red streaks, or frothy. Coughing up phlegm is mucus (sputum) that originates from the airways or lungs. It reveals inflammation in the respiratory organs below the vocal cords (voice box, windpipe, bronchi and lungs). The color, thickeness and even odor of the mucus may be helpful in diagnosing the exact condition that may cause excessive mucus. 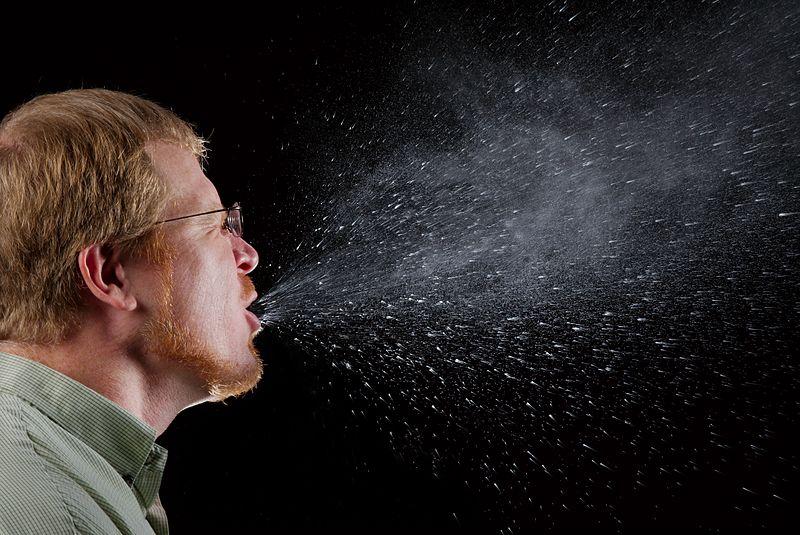 Clear or cloudy (white), thin and translucent mucus means there is no (or not much) pus or blood in it. Causes of clear white phlegm include:

Mucus is yellow, when it contains inflammatory cells, mainly leukocytes. Thin yellow mucus can result from any cause of inflammation of respiratory tract: infection, allergy, asthma, irritation. Thick yellow mucus speaks for infection – viral or bacterial. It is a regular symptom in acute or chronic bronchitis or bacterial pneumonia.

Brown mucus can be due to:

Grey mucus can be caused by air pollution , cigarette or marijuana smoking.

Black mucus can be due to:

NOTE 1: vomiting black liquid is a symptom of bleeding from the stomach and has to be checked by a doctor as soon as possible.

Frothy mucus originates from lungs. In pneumonia or lung edema, fluid washes some surfactant (a substance that keeps lung vesicles dilated) from vesicular walls into inflammatory fluid and makes it frothy. Frothy mucus may be also caused by gastroesophageal reflux disease (GERD).

The color of mucus may vary although it usually clear in color. Its if often mixed with saliva when passed out through the mouth (spitting or coughing).

Clear, thin and watery mucus (serous) or clear to white, thick mucus (mucoid) is often accepted as the normal color and may be seen in the early stages of an infection or other inflammatory conditions. Pink to red or rust colored mucus is a sign of blood within the mucus and is usually associated with a severe infection or inflammatory response.

Why is mucus green?

Green mucus is a result of dead neutrophils, a type of white blood cell active in infectious and inflammatory responses, within the sputum. When neutrophils die and burst (lysis), it releases a green pigment known as verdoperoxidase. This is an enzyme responsible for the perioxidase activity of pus.

Initially, in the acute stage of an infection or inflammation, the presence of live neutrophils causes the mucus to be yellow in color. Another type of white blood cell known as an eosinophil, which is often seen in allergy-related conditions like asthma, also causes mucus to be yellow in color. As the infection or inflammation becomes longer lasting (sub-acute or chronic), the lysis of neutrophils results in green mucus.

There is a common misconception that yellow to green mucus is associated specifically with bacterial infections. Neutrophil activity is seen in the presence of any invading pathogen, whether it is bacteria, viruses or fungi. Prolonged inflammatory responses, even if not due to infectious causes, will also result in green mucus.

Mucus is often secreted in excess in certain conditions, especially in respiratory tract infections. It may originate from from the nose of mouth (catarrh) or from lower down the respiratory tract (sputum, phlegm). Rarely, it may emanate from the upper esophagus.