What is a neuron?

A neuron is a nerve cell although the word is sometimes also used for a nerve supporting cell. Our nervous system is primarily made up of two types of cells – the nerve cells (technically called the “neurons”) and the supporting cells (technically called the “glia” or “glial cells”). The neurons form the functional unit of the nervous system, which means it performs all the activities like learning, memory, emotion, calculating and so on. For our brain to work, millions of neurons communicate with each other using electrical and chemical signals. The glia are thought to provide physical support to the neurons by enclosing them in a sheath and providing nutrition. 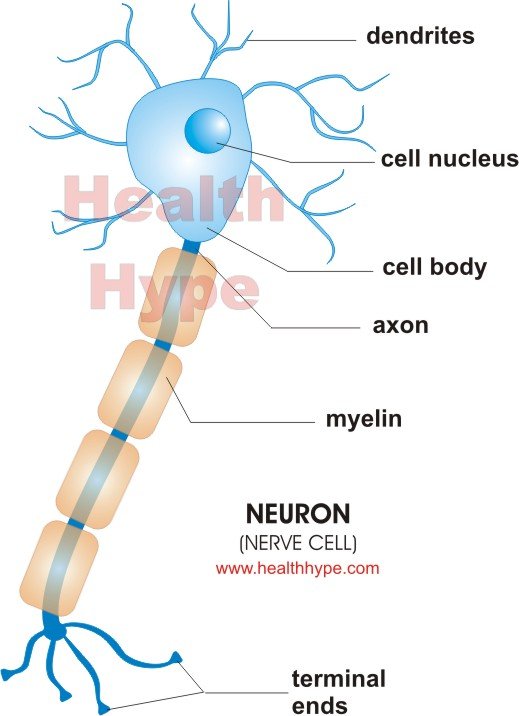 The latter two bring information to and away from the cell body of neuron. The cell body contains the nucleus and other organelles similar to any other cell in the body. The axon is covered by thick layers of myelin sheath, which is formed by the supporting glial cells. This myelin sheath insulates each neuron and increases the speed of electrical conduction of signals along the axon.

Neurons are generally classified in one of the following ways :

Depending on the number of extensions branching out from the cell body, a neuron can be classified as being bipolar, pseudounipolar or multipolar.

Depending on the direction of information flow, neurons are classified into three types – sensory neurons, motor neurons and interneurons.

Although neurons conduct information via electrical impulses, they also communicate with one another using chemical messengers known as neurotransmitters. Each neuron predominantly uses a single type of neurotransmitter and this provides a way to classify these neurons. Some of the commonly used neurotransmitters are :

How does a neuron work?

Neurons exchange information with each other at the terminals of axons and dendrites. These terminals form a specialized structure known as the synapse (Greek: “syn” = together + “haptein” = “to clasp”). The communication between two neurons begins with the flow of an electrical impulse, known as the action potential, in one of the neurons. This action potential travels down the axon and reaches the synaptic terminal. Here it triggers the release of neurotransmitters in the synaptic cleft, a tiny space between the terminals of two communicating neurons. The released neurotransmitter then binds to the receptors on the synaptic terminal of the other neuron and induces an action potential in that neuron as well. Now an electrical impulse will travel along the length of the neuron.

Neurons form the communication channels between the brain and the rest of the body. The sensory (or afferent) neurons bring information from the sense organs located at various places in the body to the brain and the spinal cord. Motor (or efferent) neurons relay the information in the opposite direction – from the central nervous system to the glands and muscles of the body. The collective behavior of sensory, motor and interneurons gives rise to all the behaviors of the body.

Neurons are different from the other body cells in one crucial aspect – as a general rule, they do NOT regenerate. This makes the neurological disorders debilitating and difficult to manage. Various nerve diseases are known to have different underlying reasons. Some defects are characterized by the death of neurons while others cause impairments in the normal functioning of neurons. Regardless of the mechanism, the decreased number or functioning of nerve cells would present characteristic symptoms depending on the brain area affected.

There are neurodegenerative diseases which include conditions where neurons progressively degenerate. Examples include Parkinson’s disease, Alzheimer’s disease, and Huntington’s disease. Dopamine is an important neurotransmitter produced by neurons present in an area of the midbrain known as the substantia nigra. For unknown reasons, these neurons die and this causes the motor symptoms of Parkinson’s disease. Altered dopamine levels are also associated with schizophrenia, one of the most common psychotic conditions.

A massive loss of neurons and synapses characterizes Alzheimer’s disease, which presents impairments in cognitive and functional abilities of the brain. A condition that affects muscle coordination is Huntington’s disease in which motor neurons are damaged with the accumulation of an undesired protein in them. The degeneration of motor neurons in a brain area known as the cerebellum can lead to cerebellar ataxia that is characterized by uncoordinated movements and unstable gait. The selective degeneration of motor neurons is the presenting feature of motor neuron diseases like amyotrophic- and primary lateral sclerosis, progressive muscular atrophy and progressive- and pseudo-bulbar palsies.

Some neurodegenerative diseases involve the degeneration of the myelin sheath, which adversely impacts neuronal functioning. Myelindegradation results in loss of conduction along the axon and the neuron eventually dies. Diseases that affect the myelin sheath include multiple sclerosis, Guillain-Barré Syndrome, acute disseminated encephalomyelitis, transverse myelitis, central pontine myelinosis, and demyelinating diseases like Charcot Marie Tooth and Leukodystrophy, etc. These conditions are often progressively incapacitating because in humans, unmyelinated neurons and myelinated axons of the brain do not regenerate. The abnormal functioning associated with action potential can also lead to conditions like epilepsy and seizures.

Inflammation is known to be the mechanism behind progressive neurodegenerative conditions like inflammatory demyelinating polyneuropathy, amyotrophic lateral sclerosis and so on. Encephalitis also might ensue in brain due to inflammation as a result of viral infection. Inflammation is the body’s response to injury although it sometimes occurs even when the body is not damaged or injured in any way. Often in these cases, it is the immune system that is attacking the body which is an abnormal event. Nerves can become inflamed and this is known as neuritis. When any part of the body becomes inflamed then its normal functioning is impaired. These functions will most likely return to normal once the inflammation subsides. However, severe inflammation and serious injury may render the nerve cell useless.