Although it is the source of much amusement, passing wind through the rear is also  the cause of much embarrassment when it occurs in public. It is a normal act that occurs in every person from time to time. However, there are instances where it can be excessive and therefore cause significant distress due to its social impact. Most of us are able to retain flatulence when we feel the need to pass wind until the setting is appropriate to expel it. However, in some people there is an inability to control flatulence leading to the passing of wind at the most inappropriate of times. It can be such a major problem that a person may withdraw from social interaction and it can even lead to anxiety and depression.

One of the major problems in the gut is the build up of gas. If it arises in the upper gut then it can often be passed out with a belch or burp. Once it reaches the lower gut then it is expelled in the form of flatus – wind passed through the rear. As with a belch, flatus can be passed out loudly or softly. Generally it tends to have an offensive odor. In this way, people experience flatus by its sound or smell. The person passing out the flatus experiences the build up of gas in the lower bowels, and within the rectum. It causes a similar sensation to feces and in this way a person is alerted that they will need to pass out flatus soon.

Most of us restrain ourselves and only consider passing flatus when the situation is appropriate, usually when we are alone. It is more likely to be evacuated when passing stool and during sleep when we are unable to restrain ourselves. However, not every person is able to restrain themselves in this way. Sometimes it is due to excessive gas in the lower gut which becomes uncomfortable unless expelled into the environment. At other times the problem lies with the anal sphincters, one of which is under voluntary control, thereby allowing us to control when and where we pass out the gas.

There is always some quantity of gas in the gut. This is estimated to be less than 200ml (about 7 fluid ounces) at any one time. Flatus is gas from :

The colon is heavily populated by a number of different species of bacteria. This is known as the intestinal flora. These naturally occurring bacteria usually do not cause any disease and aids in nutrition. Its population is kept in check by various factors. It is these bacteria and the decomposition of any food remnants and wastes in the bowels that are largely responsible for the foul odor of feces and flatus. 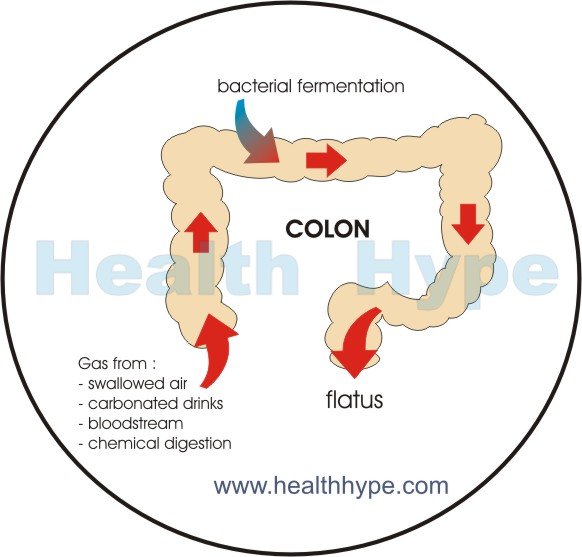 Therefore about 75% of flatus is composed from the bacterial decomposition in the colon. This gas contains hydrogen, methane and carbon dioxide. The presence of hydrogen sulfide, a compound frequently associated with rotting eggs, is the main reason for the offensive odor of flatus.

The control of flatulence is not significantly different from that of defecation. Once it is in the lower parts of the colon, gas can pass downwards towards the rectum. The rectum is usually empty until it fills with gas or feces. With diarrhea, it can also fill with water. Here it causes distension of the lower colon and rectum. It is this distension that makes us feel the urge to pass out flatus. It can sometimes be mistaken for an urge to pass out stool. This urging is known as bowel tenesmus.

Certain foods contribute to larger amounts of gas in the gut. These foods include :

Most of these foods either contain a high concentration of sulfur compounds or fiber which is indigestible in the human gut.

Sometimes certain foods are not well tolerated because it cannot be digested or absorbed in the gut. This is known as food intolerance and malabsorption. The remaining nutrients in the gut in these cases provide nourishment for the bacteria in the gut. Gas is therefore produced by these bacteria in the fermentation process.

The main reason for excessive flatulence is eating foods that increase gas production as well as air swallowing and carbonated beverages. Impaired digestion (maldigestion) and malabsorption syndromes are other fairly common causes that may contribute to excessive flatulence. This includes conditions such as :

Other reasons for excessive gas includes :

Functional incontinence occurs when there is significantly defective or absent bowel control yet there is no disease or dysfunction of the sphincters. This may be seen in wheelchair bound patients and the likelihood also increases with age, particularly in seniors.

However, none of these other symptoms may be present apart from uncontrollable flatulence.

Dietary measures may be more effective in the long term management of uncontrollable flatulence. This mainly involves avoiding foods that tends to promote gas build up and flatulence.