Normal color of the tongue

The human tongue is a muscular organ that plays various roles in chewing, swallowing and talking. It lacks the protective skin and therefore its color is largely dependent on that tissue it is composed of in addition to the blood flowing through it. Therefore the color of the human tongue is normally a pink-red hue. The whitish coating sometimes seen on the top of the tongue varies from person to person and during different times of the day.

It is mainly due to small food particles becoming trapped within the small protrusions on the tongue known as the papillae that gives the tongue a rough surface. Furthermore bacteria and saliva act on these trapped particles thereby causing it to break down. This whitish tongue coating can easily be brushed away and is minimal in a person with good oral hygiene. The tongue has three main parts : 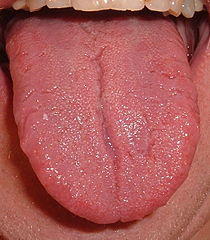 In some people there may be a brown to black discoloration of the tongue which occurs in patches or streaks. This may be present from birth and is usually not a cause for concern provided that it does not enlarge over time or present with other symptoms. This blackish discoloration is usually permanent and therefore cannot be removed. However, there are other causes of both a white coating and a blackish discoloration which can be a sign of some underlying disease and therefore needs to be investigated and treated accordingly.

Abnormal Colors of the Tongue

White patches, streaks or lines are the most common tongue discoloration. As discussed above, a whitish coating is not uncommon and often related to poor oral hygiene.

Two other possible causes of white discoloration of the tongue includes syphilis and geographic tongue. The latter is discussed further under bright red tongue. A temporary whitish discoloration of the tongue may also occur with a fever and dehydration. Paleness of tongue that may sometimes be mistaken for whitening can occur with conditions such as pernicious anemia (vitamin B12 deficiency) and iron-deficiency anemia. 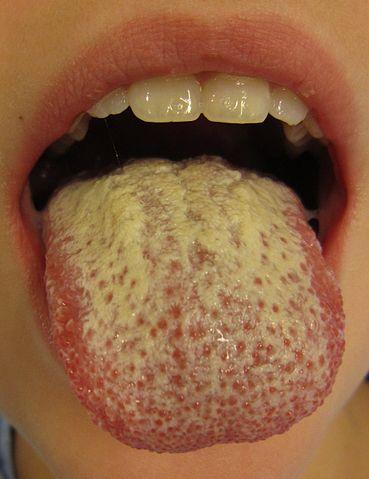 The normal color of the human tongue is pink to red. In some people the tongue tends to be more red than in others but this is not necessarily a discoloration of the tongue. 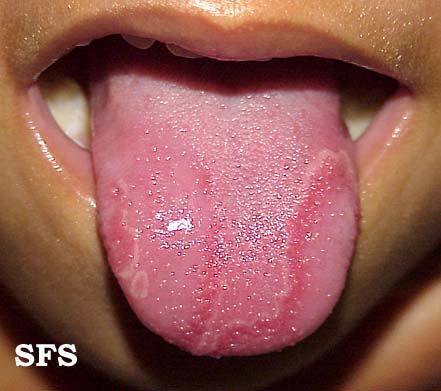 A purple or red-purple tongue may arise with certain diseases but can also precede the development of a blue tongue. It should therefore be carefully monitored in acute cases to take note of whether more distinct blueness sets in. A purple tongue is uncommon compared to other discoloration of the tongue. It is more commonly seen with nutritional deficiencies and in particular with vitamin B2 (riboflavin) deficiency. However, it is not a common symptom in ariboflavinosis.

A bluish tongue is always considered to a be a serious sign that warrants medical attention. It is an important sign of cyanosis – a condition caused by an insufficient oxygen supply to tissue. The condition may be caused by blood disorders, diseased blood vessels, cardiac (heart) dysfunction or respiratory (lung and airway) insufficiency. This may include various conditions as discussed under the causes of cyanosis such as :

This condition is known as black, hairy tongue. More food debris collects than normal and there is an increase in the bacteria within the mouth. It usually develops as a yellow discoloration, which progresses to a brown and then black discoloration. Causes may include :