The path of light through the eye needs to be uninhibited in order to form a clear image on the retina. The light-sensitive receptors then elicit impulses which are sent to the central nervous system for processing. In order to achieve this, the tissues of the eye has several specialized properties to ensure that it is transparent. During it course, light will pass through the cornea, aqueous humor, lens and vitreous humor. As it travels through these substances, it is bent to varying degrees (refraction) to form a focused although inverted image on the retina. If any of these media are tainted, it will distort the sense of vision to varying degrees and particles within the eye may be perceived as a superimposed image. 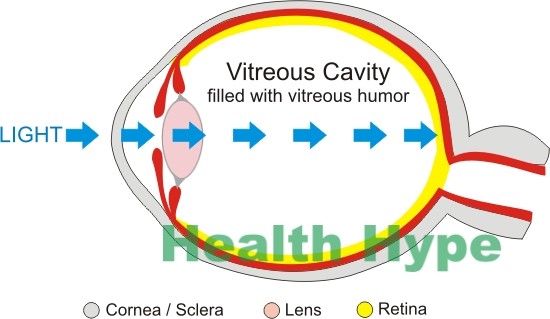 What are eye floaters?

Vitreous floaters or simply eye floaters are translucent spots and streaks that are within the visual field without any corresponding source in the external environment. This simply means that a person can see a spot, streak or object that does not exist. Vitreous floaters are not imaginary but arise due to changes within the vitreous humor, the jelly-like substance that occupies most of the area within the eyeball.

The vitreous humor gives the eye its firm and spongy consistency and is attached to the inner linings of the retina. It is normally clear but with age and certain disorders, the consistency may change and small portions may become more liquid than its usual gel form. These areas may cast semi-transparent (translucent) images or shadows on to the retina as the light from the external environment passes through it. Other particles and deposits within the vitreous humor can cause the same effect. At other times though, it may be associated with inflammation, separation of the vitreous humor from the retina, tugging of the retina, retinal tears and detachment.

Although vitreous floaters may be associated with various eye pathologies, many of which are serious in nature, a large number of cases are benign. This means that it is harmless and occurs for no known reason (idiopathic). Most people will experience the odd incident of eye floaters in life. In these benign idiopathic cases, the floaters appear to change direction in association with movement of the eyeball. The person’s vision is not impaired in any way, the floaters appear in both eyes, is more evident in bright light  and resolves on its own with no other disturbances or even treatment.

Apart from age-related changes in the vitreous humor, eye floaters may also be seen with :

Eye floaters may sometimes be associated with migraines where it may occur as part of the aura, visual disturbances that precede the onset of the head pain, and during the attack. Although floaters are usually a physical phenomenon, it can also be associated with hallucinations as a result of narcotic drug use or with psychiatric conditions like schizophrenia.

Signs and Symptoms of Eye Floaters

Floaters are a symptom on its own and not a condition. In benign idiopathic cases, it is present with no other signs and symptoms. However, floaters may accompany other visual, ocular or non-ocular signs and symptoms which can provide a clue to its cause. 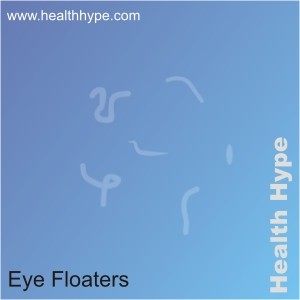 Eye floaters may be present with one or more of the following signs and symptoms :

Floaters that are excessive and arise suddenly, with loss of vision and other visual disturbances like photopsia needs immediate medical attention. Pain may not necessarily be a symptom of a serious eye disorder.

Treatment is directed at the cause of floaters. Since most cases are benign and due to unknown causes, no treatment is necessary and the condition will resolve spontaneously. Opthalmic examination by a doctor is necessary to exclude more serious causes. In rare cases, the floaters may be excessive and interfere with normal vision despite there being no serious underlying cause. A surgical procedure known as vitrectomy may then be considered where the vitreous humor is drained from the vitreous cavity and liquid or gas is injected in its place.