The carotid arteries are a group of arteries that rise up the neck to supply oxygenated blood to the brain, face and many other parts of the head. It is not the only supply of arterial blood to these areas but it is among the most significant. Injury, occlusion (blockage) or any rupture of these arteries can be life threatening.

The aorta is the large artery that carries oxygenated blood out of the heart and distributes this blood throughout the body. Two carotid arteries arises directly or indirectly from the aortic arch :

The right common carotid artery does not branch off directly from the aorta. The brachiocephalic trunk which is the first and largest branch of the aortic arch divides into the right common carotid artery and right subclavian artery. This branching of the brachiocephalic trunk occurs to the right of the trachea around the level of right sternoclavicular joint – where the clavicle (collar bone) articulates with the uppermost part (manubrium) of the sternum (breastbone).

The left common carotid artery arises directly from the arch of the aorta. It is the second branch and starts just behind the manubrium of the sternum. It passes across the trachea (anterior) and then runs up into the neck to the left of the trachea and behind the left sternoclavicular joint. 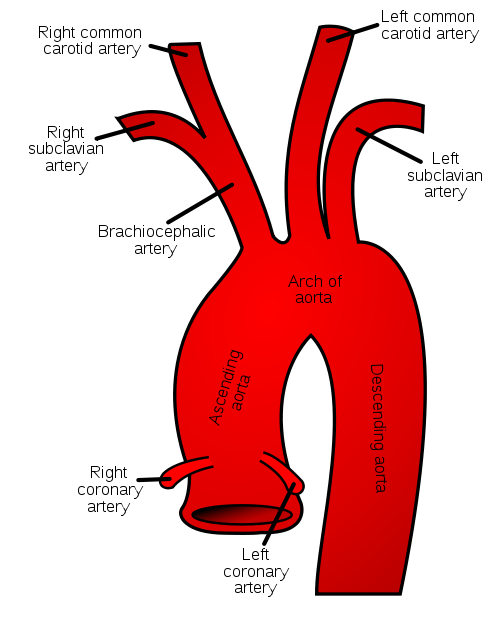 The right and left common carotid arteries run up the neck on the respective side in the carotid sheath along with the internal jugular vein and vagus nerve. It enters an area that is known as the a carotid triangle. Here it can be easily felt (palpated) or heard with a stethoscope (auscultated) as the carotid pulse.

At the upper part of the carotid triangle, the common carotid artery divides into the internal and external carotid arteries. This bifurcation occurs at the level of the superior border of the thyroid cartilage of the larynx (voice box). 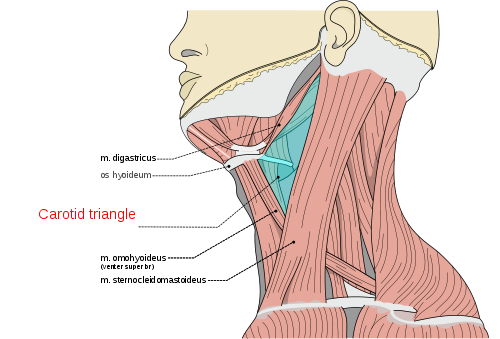 There are two important structures that are situated around the branching of the common carotid artery – the carotid sinus and the carotid body. Both these structures perform vital functions in monitoring the blood and are innervated by the carotid sinus nerve which is a branch of the glossopharyngeal nerve (CN IX), as well as the vagus nerve (CN X).

This is a small oval mass located at the bifurcation of the common carotid artery, between the two branches – internal and external carotid arteries. It is a chemoreceptor that monitors the oxygen levels in the blood.

There are no branches from the internal carotid artery in the neck region. 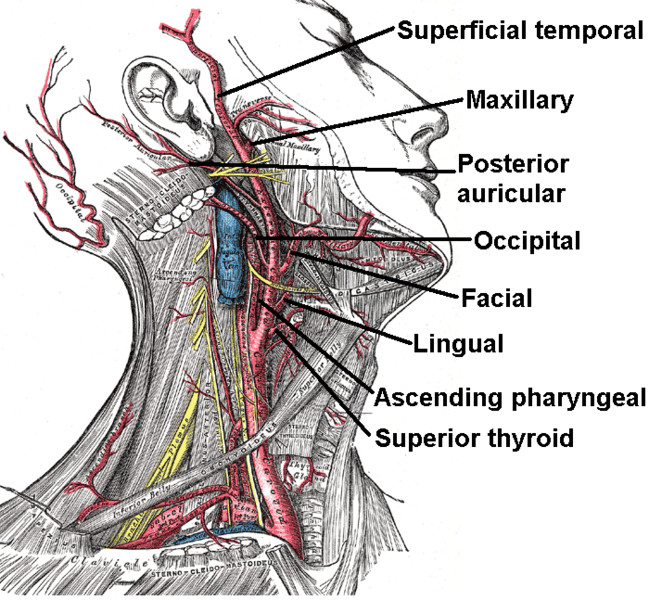 This is the second terminal branch of the common carotid artery. It gives off many branches along its course which supplies different parts of the face and head. It eventually terminates into the two branches mentioned below.

Branches of the external carotid artery :