Tracheitis is the inflammation of the windpipe (trachea). Most cases of tracheitis are due to a bacterial infection, however, a number of other factors, both infectious and non-infectious, may also cause inflammation of the trachea. Usually these other factors do not affect the trachea in isolation but may also involve other structures higher up and lower down the respiratory tract.

A number of different bacterial species are responsible for the majority of tracheitis cases. Frequently this occurs as a secondary bacterial infection that follows a viral respiratory tract infection like influenza (seasonal flu) or H1N1 swine flu. The common cold can also lead to tracheitis but this type of viral infection is usually isolated to the upper parts of the respiratory system.

Some of the bacteria that may be involed include Streptococcal species like S. pyogenes and S.pneumoniae, as well as Staphylococcus aureus and Haemophilus influenzae. Less frequently, other bacteria like the Klebsiella species may be involved. With the increased risk of superbugs like MRSA (methicillin resistant Staphylococcus aureus) and more recently the  NDM-1 (New Delhi metallo-beta-lactamase-1) Klebsiella pneumoniae, bacterial tracheitis can be difficult to treat depending on the causative organism. 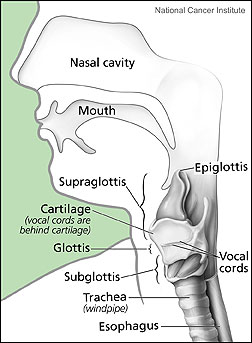 Other infections like pertussis (whooping cough) is more likely to cause an upper respiratory tact infection but a lower tract infection is also a possibility. Pertussis is caused by the bacteria Bordetella pertussis. Viral infections like croup, which is caused by a number of viral species particularly the parainfluenza species, may cause inflammation of the larynx and trachea (laryngotracheitis) or larynx, trachea and bronchi (laryngotracheobronchitis)

Tracheitis like other respiratory tract infections, especially laryngitis and bronchitis, may result in very similar signs and symptoms.

Laryngitis is the medical term for inflammation of the larynx (voice box). This is the part of the respiratory tract that connects the pharynx (throat) to the trachea (wind pipe) and contains the vocal apparatus to produce sound. The most common causes of laryngitis are an infection and trauma (chemical and mechanical injury including vocal strain). 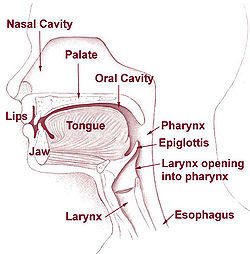 Most cases of laryngitis are acute, meaning that it last for a short period of time, anywhere from a few days (usually 7 to 10 days) to 2 to 3 weeks. Chronic laryngitis is inflammation of the larynx that lasts for more than 3 weeks and may sometimes be due to serious and even life threatening illnesses.

How does laryngitis occur?

Any injury or infection may result in inflammation of the lining of the larynx as well as the vocal cords. The results in increased blood flow (redness ~ erythema) to the area and swelling (edema). The vocal cord may become thicker or possibly even stiffer and this affects the pitch of the voice. Phonation, which is the ability to produce sound, is impaired (dysphonia) and if it is painful, a person may be unable to vibrate the vocal cords sufficiently to produce any sound (aphonia).

Often the inflammation is not isolated to the larynx. An infection may affect the neighboring structures like the pharynx and trachea and this causes a range of additional symptoms. One example is croup. This is the inflammation of the larynx as well as the trachea coupled with bronchitis and is known as laryngotracheobronchitis. It  is a viral infection that is common in children and is most noticeable by a hoarse, bark-like cough as well as abnormal breathing sounds.

The most common symptoms of laryngitis are a hoarse voice or gruff, low volume voice similar to a whisper. This is known as dysphonia. However, laryngitis is not the only cause of hoarseness of the voice. Refer to Hoarse Voice for a list of possible causes in babies, children and adults. Less frequently, laryngitis may lead to a complete loss of voice (aphonia).

If dysphonia or aphonia is accompanied by any significant difficulty in breathing, abnormal breathing sounds like a stridor, pallor (pale skin) or cyanosis (bluish discoloration of the skin), then this may be due to a laryngeal obstruction or bilateral paralysis (vocal cords) and needs immediate medical attention.

Usually community-acquired upper and lower respiratory tract viral infections are the main causes of acute infectious laryngitis. It is often transmitted through droplet spread (sneezing, coughing, contaminated objects) and most are contagious. This may involve a wide range of viruses that cause the following conditions :

In addition, respiratory syncytial viruses (RSV) which cause respiratory tract infections in children are another common cause of acute infectious laryngitis. These viruses are easily spread from child to child in the school or daycare setting.

Whooping cough (pertussis), which is caused by the bacteria Bordetella pertussis, is another cause of laryngitis. It is more common in children and infants. Furthermore, childhood diseases like mumps, measles, and chickenpox may also cause laryngitis.

Most of the infections mentioned above account for acute cases of laryngitis, however, certain microorganisms may be responsible for chronic laryngitis. These infections are not usually contagious but person-to-person transmission is possible. This includes :