What is the Pharynx and Tonsils?

The pharynx is the uppermost part of the alimentary tract and commonly referred to as the throat. It directs the passage of air and food between the mouth and nose into esophagus and larynx. The tonsils are collections of lymphoid tissue that lie in the pharynx.

Location of the Pharynx 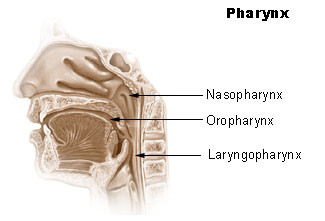 Picture of parts of the pharynx from Wikimedia Commons

Functions of the Pharynx

The pharynx has three functions based on the cavities which lies adjacent to it.

The nasopharynx is an extension of the nasal cavities and directs air downwards during inhalation and upwards during exhalation.

The oropharynx extends from the back of the mouth and carries ingested food and drinks from the mouth into the esophagus.

The laryngopharynx lies just behind the larynx (voice box) and is the lowermost part of the pharynx. It serves as a common passage for both food (into the esophagus) and air (into the larynx).

Location of the Tonsils

The tonsils form a ring on lymphoid tissue which is referred to as the pharyngeal lymphatic ring (tonsillar ring or Waldeyer’s ring). 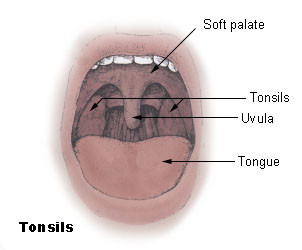 Picture of the palantine tonsils from Wikimedia Commons 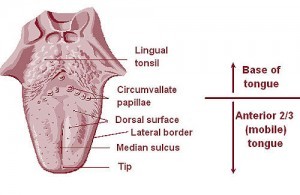 Picture of the lingual tonsil from Wikimedia Commons

Functions of the Tonsils

The tonsils may have the following functions.