What is fungal pneumonia?

Fungal pneumonia is a lung infection caused by fungi. Pneumonia is a common infectious disease and the leading cause of death from an infection in the developing world. Most pneumonias  are caused by viruses or bacteria. Fungal pneumonias on the other hand are rare. It is usually a problem for people with weakened immune systems (immune compromised). When it affects a person with a normal functioning immune system (immune competent) it is usually self-limiting and may not even need to be treated in some instances.

There are many different species of fungi that can cause pneumonia. Many are not commonly heard of because it is so rare in human diseases. It occurs mainly as opportunistic infections when the immune system is compromised. Leukemia, diabetes and HIV are some of the conditions where the immune system may be weak to the point that fungi can invade the lung tissue. Fungal pneumonia can progress to disseminated disease where it affects other organs like the brain, liver, kidneys and heart and result in life threatening complications.

The immune system, when properly functioning, prevents fungi from invading living tissue in most instances. Deep fungal infections are uncommon in the internal organs. Fungi can cause respiratory diseases by either directly invading the lung tissue or triggering an immune reaction when the it enters the air passages. Fungal pneumonia usually refers to infections where the fungi invade lung tissue. These infections arise when the fungi or parts of it like spores enter the airways through inhalation.

At other times the fungi that cause the pneumonia do so as an opportunistic infection because the immune system is so severely weakened. In these cases just about any fungus that thrives in cavities can lead to pneumonia. It is therefore referred to as opportunistic fungal pneumonia. Some examples include the Aspergillus, Candida and Mucor species of fungi. 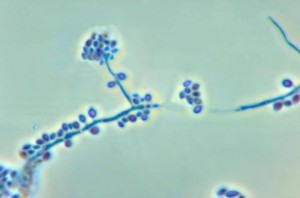 Certain species are naturally occurring on human skin and within certain cavities. It does not cause any infection because the fungal population is limited by a variety of factors and the immune system prevents these fungi from invading living tissue. Other fungal species may only be found in certain parts of the world. It may be found in the soil or in the droppings of certain animals.

Most people living in these endemic regions do not contract any disease unless they are in regular close contact with the soil, like farmworkers. At other times large populations may have the spores in their lungs but do not develop a disease due to the immune system keeping the infection at bay. This is known as a latent infection. If the immune defenses drop then the infection will become apparent.

Although long term diabetes and HIV/AIDS are widely known to weaken the immune system, there are many other conditions that have a similar effect and therefore increase the risk of developing diseases like fungal pneumonia. This includes:

Some people are born with immune deficiency syndromes. There is also the possibility that genetic factors may be involved in increasing the risk of some people developing fungal pneumonia as compared to others.

The signs and symptoms of fungal pneumonia are largely the same as that of viral and bacterial pneumonia. Since fungal pneumonia is not common, often other infectious lung conditions are suspected once the symptoms become apparent. The seriousness and prevalence of tuberculosis (TB), especially in people living with HIV/AIDS, means that it should first be excluded as a possible cause of the pneumonia symptoms. 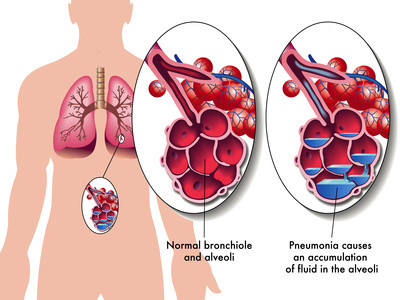 With regards to fungal pneumonia, the following signs and symptoms may be present.

In people who are immune compromised the infection can spread beyond the respiratory system. This is known as disseminated disease. It may even spread throughout most of the body (systemic). As a result there may be other signs and symptoms depending on the organ that is affected. These symptoms that lie outside of the respiratory system are known as extrapulmonary symptoms. Some of the organs that may be affected includes:

The kidneys, liver, spleen, muscles and eyes may also be affected as well as the nasal cavity and paranasal sinuses.

Although antifungal medication is very effective in treating fungal pneumonia, the mortality rate is quite high in some instances. This is largely due to the delay in seeking medical treatment and the fact that people who develop fungal pneumonia are often immune compromised. Therefore it is imperative to treat the underlying condition that is contributing to the immune deficiency, although this may not always be possible.

The choice of antifungal depends on a number of factors. For example fluconazole may be used for Candida infections and amphotericin B may also be used if fluconazole or echinocandins cannot be used for any reason.