The main function of the kidney is to filter fluid from the blood and concentrate the solution of waste materials which is passed out as urine. It can also control the levels of electrolytes and water that is lost in the urine or retained in the body thereby influencing blood volume and blood pressure. This ensures that the body is able to maintain a state of balance that is optimum for sustaining life (homeostasis). The kidney broadly has three main regions, an outer lying cortex, middle region known as the medulla and inner pelvis. The renal cortex and medulla is where the main processes of urine production occurs. The urine then accumulates in the renal pelvis and is directed towards the ureter, a narrow tube that carries urine from the kidney to the urinary bladder.

What is the nephron?

The nephron is the main functional unit of the kidney which is responsible for filtering the blood and concentrating the solution to produce urine. In the process, macronutrients, electrolytes and the required amount of water are retained while waste substances,  excess electrolytes, micronutrients and toxins are expelled. There are some 1 million nephrons in each kidney but this number gradually decreases with age or more rapidly with certain diseases. Broadly the nephron has two main parts – the glomerulus and tubule.

What is the glomerulus? 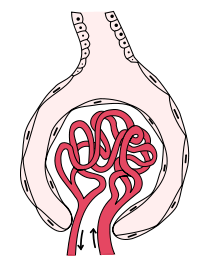 What is the tubule?

The tubule is the long narrow tube where the filtered fluid from the Bowman’s capsule is processed and converted into urine. The tubule itself has several segments include :

Diagram of the Nephron, Glomerulus and Different Parts of the Tubule

The tubules are lined with a thin layer of epithelial cells. The thinner segments of the tubules like the descending limb and first part of the ascending limb of the loop of Henle has cells with minimal organelles. The other segments have thicker cells with a brush border and are rich in mitochondria to facilitate active and passive mechanisms of  tubular reabsorption and tubular secretion.

Formation of Urine through the Nephron

Different parts of the nephron are responsible for its various functions. Fluid filtered from the blood enters the Bowman’s capsule then flows into the proximal tubule, down the descending limb of the loop of Henle, then up the ascending lip, into the distal tubule and then the connecting and finally the collecting tubule.

There are three stages to urine formation :

This occurs when fluid from the glomerular capillaries pass into the Bowman’s capsule. This is fairly non-selective meaning that almost all of the substances in the the blood except cells and plasma proteins as well as the substances bound to these proteins enter the nephron.

During this phase, all parts of the tubule act to return essential substances out of the nephron so that it is not lost in the urine. It is a highly selective process in that the tubules carefully “choose” what will be returned to the body and what will be passed out with the urine. This transfer of substances is known as tubular reabsorption and may involve both active and passive mechanisms.

Some of the substances pass through the space between the epithelial cells while others through the cells itself. In this way, the substances are returned back to the body either by being “dumped” into the tissue of the kidney outside of the nephron or returned directly into the bloodstream.

Just as substances that enter through the glomerulus are removed from the nephron and returned to the body, many substances are drawn from the body and “dumped” into the tubules. Acids, alkalines, certain ions, toxins and drugs are secreted into the tubules and this process is known as tubular secretion. In this manner it can be rapidly passed out with the urine independent of glomerular filtration and in a more selective manner.

Functions of the Nephron

The basic function of the nephron is to filter blood and remove waste substances while retaining essential substances for various biochemical processes. In the process, the nephron can also influence the pH (acid-base balance) of the blood, regulate blood pressure, maintain the blood volume and control the level of electrolytes in the body fluids.

The functions of the nephron can be discussed with regards to each part :