Trigonitis is a condition where the the cells lining the lower part of the bladder undergo changes into a different cell type. The affected part of the bladder is known as the trigone, hence the term trigonitis. There is often confusion about trigonitis since the term -itis usually indicates inflammation. While there may have been some inflammation, the condition trigonitis specifically focuses on the changes in the normal cells lining the bladder. The concept of cells undergoing abnormal changes raises the question about cancer. However, the cellular changes in trigonitis is benign (non-cancerous) and does not have any potential to become malignant (cancerous). Trigonitis mainly occurs in women of childbearing age. It occurs in a minority of men and is almost never seen in children.

Trigonitis where there are changes in the type of tissue lining the bladder is more correctly known by the medical term pseudomembranous trigonitis. Although the term trigonitis can also refer to inflammation of the bladder lining, this is usually encompassed by the term cystitis.

Location of the Trigone

The trigone of the urinary bladder is the triangular shaped area on the back wall of the bladder. It is marked by three points :

The trigone is smooth compared to the rough internal wall of the rest of the bladder. Most of the urinary tract is lined by a tissue known as the urothelium. It is an epithelial tissue similar to that lining the gut but is specialized to deal with the urinary tract environment. Urothelium is about 3 to 5 layers thick, highly elastic and regenerates very quickly to maintain the inner lining of the urinary tract. 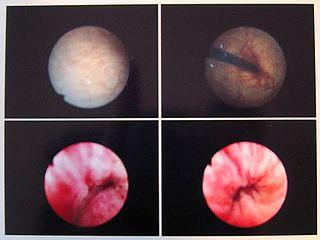 Internal view of the bladder (picture from Wikimedia Commons)

Tissue Changes in the Trigone

There is a variant of trigonitis where the squamous epithelium become keratinized, similar to the skin. In this type of trigonitis, some of the urine seeps into the deeper layers of the tissue lining the bladder. It occurs because of the spaces between the keratinized squamous epithelium cells as well as the lack of mucus normally produced in small quantities by the urothelium.

There are several theories as to why this tissue changes from urothelium into non-keratinized squamous epithelium. Some of these contributing factors may be more likely for women than men, or in certain situations. However, it is important to note that the exact cause of trigonitis is unknown.

It has been discovered from biopsies (tissue samples) that the tissue which undergoes changes have receptors for hormones such as estrogen and progesterone.  This may support the theory that the tissue change in trigonitis is a result of hormones. It may also possibly explain why the condition is more frequently seen in women of childbearing age, a period when these hormones are at its highest levels in life. A hormonal cause may also explain why trigonitis is more likely in men undergoing hormone therapy for prostate cancer.

It is possible that the tissue changes that marks trigonitis arises as a result of chronic infection of the lower urinary tract. Recurrent cystitis (bladder infection) causes repeated and ongoing inflammation of the tissue lining the bladder. This may trigger changes in cell growth and differentiation eventually leading to metaplasia as is see in trigonitis.

Chronic irritation may also be a factor in the development of trigonitis in much the same wys as an infection. Persistent irritation of the trigone in this manner may be seen with the long term insertion of an indwelling urinary catheter which may be used for :

A person with trigonitis may be asymptomatic meaning that no symptoms are present. In fact symptoms when present are not specific for trigonitis and it is more likely to present as urinary tract infections (UTIs) or prostatitis (men). The diagnosis of trigonitis is made during examination of the inner bladder lining through the investigative technique known as cystoscopy.

Symptoms of trigonitis may include :

Recurrent UTIs may be another feature of trigonitis.

Cystoscopy is where a thin tube containing a light and camera at the end is inserted into the urethra. In this way the doctor can visualize the interior of the urethra and bladder on a monitor. The area where the tissue change has occurred, namely the trigone, may have a shiny and fluffy white appearance compared to the normally pink appearance of the inner bladder lining. The sight of this tissue change is sufficient to make a diagnosis at that point. 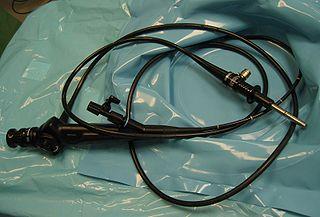 A sample of the tissue at the trigone is usually not necessary unless the patient has blood in the urine (hematuria) or the tissue change seems to extend to other parts of the bladder lining. The sample tissue (biopsy) then has to be taken and examined under a microscope to detect any pre-cancerous changes which may warrant a different approach to treatment.