A thrombus is a blood clot that forms inside a blood vessel. It may be temporary and can be dissolved but there is the risk of it growing further and occluding a vessel. The process of thrombus development and growth is known as thrombosis and over time it can impair blood flow which in turn affects oxygen supply to a part of the body.

If a thrombus dislodges from the site where it is formed, it can travel through the bloodstream and lodge elsewhere, usually in a smaller blood vessel where it gets stuck. This is known as an embolism and can cut off the entire blood supply to an area.

The three components of thrombosis is known as Virchow’s triad.

The inner layer of the blood vessel is known as the endothelial lining or endothelium. These cells as well as other chemical components in the blood (clotting factors) prevent platelets from attaching to the vessel wall (antithrombotic properties). If the endothelium is damaged, it triggers prothrombotic properties and platelets will attach to the site of damage. Fibrin then accumulates at the site and a blood clot is formed.

When the damage to the endothelium is severe or if the clotting process occurs too rapidly, red and white blood cells also get trapped in the clot. More platelets will layer on top of this and further fibrin deposition occurs. The clot grows over time and since it occupies space within the lumen of the blood vessel, it interrupts blood flow. 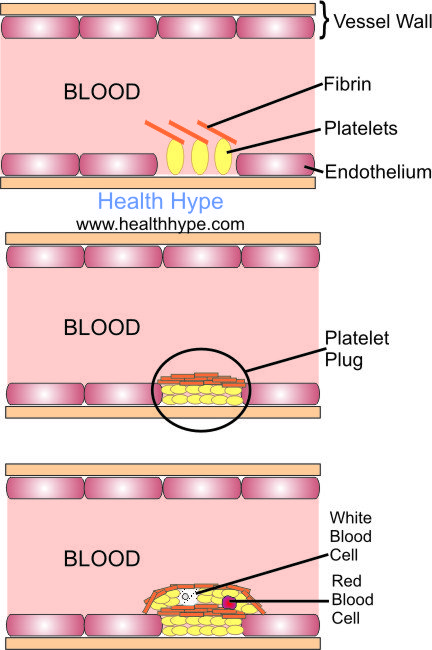 When blood flows through a vessel, the blood components like cells flow in the center and do not make much contact with the endothelium while the blood plasma flows on the outer part next to the endothelium. If this blood flow is disrupted by any narrowing like plaques (example : artherosclerosis) or arterial spasm, it forms eddy currents. Blood cells and platelets come into contact with the endothelium and may stick onto it. Stasis is where the blood flow slows especially in an enlarged part (bulge like an aneurysm) in the vessel. It slows the movement and flushing out of activated clotting factors and encourages thrombus formation.

This is a rare cause of thrombosis and occurs when the coagulation process is triggered at a site. This may be primary like in genetic clotting disorders or may be secondary where it is acquired after trauma, surgery, childbirth or a malignancy that is disseminated.

What happens to a thrombus?

A thrombus can form in an artery or vein. Venous thrombosis (phlebothrombosis) is more common because the blood in the veins are under lower pressure and is easily slowed down by many types of disorders (stasis). Deep vein thrombosis (DVT) is an example of a thrombus which occurs in the deep calf veins of the legs but may extend upwards to the popliteal, femoral and iliac veins. An example of artery thrombosis is when then the coronary arteries become occluded and thrombosis as a result of plaque formation (endothelial damage/alteration to blood flow) and can lead to a myocardial infarction (heart attack).