What is the liver?

The liver is the largest organ in the body and plays integral roles in the metabolism of foods and toxins, storage of nutrients and the production of a number of compounds which influence many physiological processes in the body.

The smallest functional unit of the liver is known as a lobule and about 50,000 to 100,000 of these lobules collectively form the liver. These lobules are a collection of liver cells (hepatocytes) which are separated from each other by large capillary spaces called sinusoids. This structure ensures that each liver cell has maximum exposure to blood to adequately conduct its functions.

Anatomy of the Liver

Position of the Liver

The liver is located within the abdominal cavity, with most of it lying in the right upper abdominal quadrant (RUQ). When lying flat, it sits almost entirely behind the ribcage and so that the top part of the liver is just a few centimeters away from the nipple. Standing up erect or breathing in deeply shifts the liver lower into the abdominal cavity. The liver crosses the midline and extends to the left upper abdominal quadrant (LUQ).

Surfaces of the Liver

The liver has a round convex surface at the top (superior) which sits just under the diaphragm. Hence, this part of the liver is known as the diaphragmatic surface. The bottom surface (inferior) faces to the back (posteriorly) and this posteroinferior surface is known as the visceral surface. It derives it names from that fact that it makes contact with many of the other organs and structures within that area in the abdominal cavity. It is on this surface that the gallbladder lies as illustrated in the picture below.

Lobes of the Liver

The liver has 4 lobes – 2 anatomical lobes (right and left) and 2 accessory lobes (caudate and quadrate). The distribution of blood means that the liver can be functionally divided into a left and right lobe. These lobes can function independently of each other and is also referred to as the right liver and left liver. The caudate lobes as well has a fairly independent blood supply and can be considered as the “third liver“. 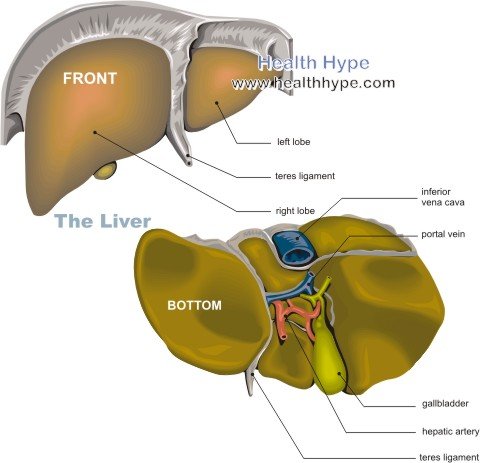 Functions of the Liver

The liver is one of the most versatile organs in the body, playing crucial roles in diverse physiological processes. This includes :

The liver breaks down complex carbohydrates (example : fructose, lactose) into simpler carbohydrates like glucose, which can the be utilized by the body for energy production. Excess glucose which is not needed immediately by the body is stored in the liver as glycogen.

In the event of low blood sugar levels, the liver then releases the stored glucose to regulate the sugar levels. This is known as the glucose buffer function. In the absence of carbohydrates, especially with high protein, no carbohydrate diets, the liver will use protein and fats to produce glucose.

The liver breaks down amino acids by removing the functional group (NH2) which allows it to be used for energy production or converted into carbohydrates and/or fat. This process is known as deamination. During the deamination process, ammonia is formed. The liver is able to remove ammonia by converting it into urea and excreting it mainly via the kidneys as urine.

Apart from breaking down proteins, the liver can also produce amino acids. It does this by converting existing amino acids into other types of amino acids (interconversion). Plasma proteins, which are an integral part of blood, are also produced by the liver.

The liver breaks down fats into acetyl-CoA (acetyl coenzyme A) to for energy production. Conversely, fat may be synthesized by carbohydrates and proteins as it is the more efficient form of nutrient storage. Certain types of lipids like cholesterol, phospholipids and lipoproteins are also produced within the liver.

Filtration and Storage of Blood

The liver plays an important role in filtering the blood and storing blood so that it is not in circulation. Approximately 1.5 liters of blood pass through the liver every minute. This blood enters through the portal vein and hepatic artery. Excess nutrients are removed and processed as described above or stored, toxins are neutralized and secreted and specialized liver cells also play a part in removing pathogens. Calcium and the body’s own hormones are also neutralized and/or removed from the body by the liver.

Up to 500 milliliters of blood is stored within the liver in the hepatic sinuses and hepatic vein. This excess blood can be released into the circulation should the body require it. In the event of any congestion that results in backflow of blood, the liver may hold up to 1 liter of blood or more before it becomes damaged. This can significantly increase the weight of the liver (normal weight in adults is approximately 1.5 kg).

Bile is an important compound for the emulsification of fats in the gastrointestinal tract. It is also a means for the body to get rid of bilirubin from the bloodstream as well as cholesterol produced by the liver. The formation, function and secretion of bile is discussed further under What is Bile?

The liver produces essential clotting factors which are crucial for the coagulation of blood. This  includes :

* The liver requires vitamin K to produces these factors.

Storage of Vitamins and Minerals

The liver stores many micronutrients including vitamins A, D and B12 and minerals like iron (stored as ferritin). The storage capacity of the liver is so large that it has enough of some of these vitamins to sustain the body from a few months to several years should there be no further nutrient intake.