Joints are the flexible parts of the body that allow for various degree of movements between two or more bones. In order to understand the anatomy of the wrist and hand joints, it is first important to identify all the bones in this part of the upper limb. The bones of the forearm include the radius and ulna which extend from the elbow joint to the wrist joint where it articulates with the wrist bones (carpal bone). 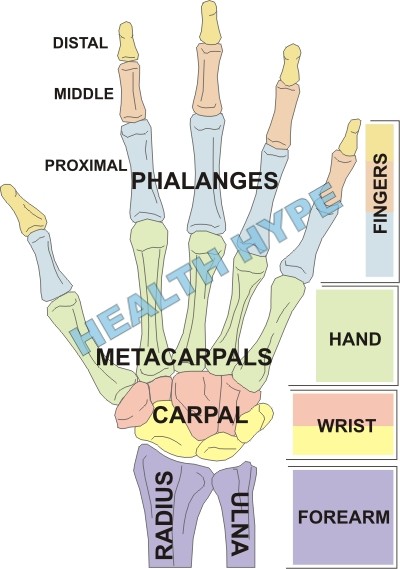 The capsule of the radiocarpal joint has an outer fibrous layer and inner synovial membrane. The fibrous layer encapsulates the entire joint attaching to the ulnar, radius and proximal carpal bones. Internally the synovial membrane forms several folds that line the articular surfaces. Several ligaments strengthen this joint including the dorsal and palmar radiocarpal ligaments, as well as the ulnar collateral and radial collateral ligaments.

There are four set of joints within the carpal bones itself. Firstly, each carpal bone articulates with neighboring bones – joints between the proximal row of carpal bones and the distal row of carpal bones. Then the promximal and distal row articulate with each other at the midcarpal joint. Lastly, the pisiform and triquetrum form the pisotriquetral joint. The capsule of these joints is an extension of the carpometacarpal joints – between the wrist (carpal) and hand (metacarpal) bones. However, the capsule of the radiocarpal (wrist) and wrist and thumb bone (carpometacarpal thumb joint) are separate. The anterior, posterior, and interosseous ligaments secure the small carpal bones in place and ensure that it locks in to articulate with each other. 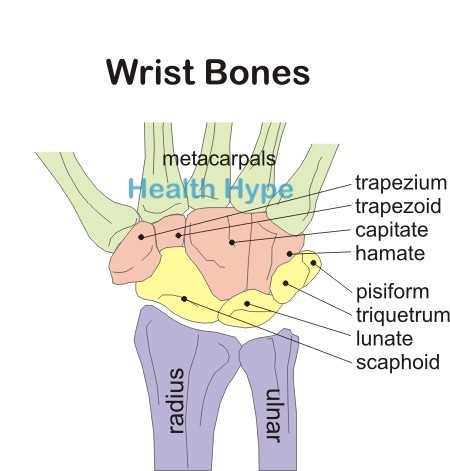 The carpometacarpal joints, or CMC joints for short, are not as flexible as the other joints of the hand. The CMC joint of the thumb is highly mobile and the fourth and fifth CMC joints as well but to a lesser degree. However, there is almost no movement at the CMC joints of the second and third metacarpals.

There are three intermetacarpal joints between the second and third, third and fourth, and fourth and fifth metacarpals. These joints are also surrounded by the same capsule as that of the medial four CMC joints. The thumb is extremely flexible in humans (opposable thumb) and this is facilitated by the very loose capsule between the base of the first metacarpal bone (thumb) and trapezium (carpal bone). 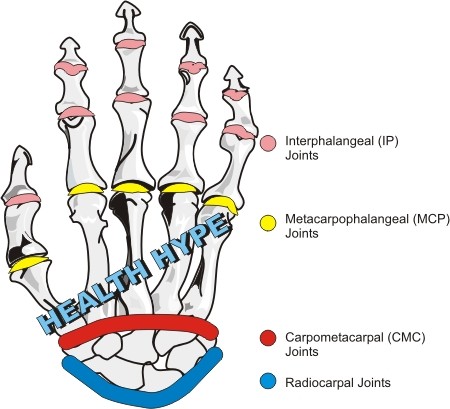 The metacarpophalynheal joints are condyloid synovial joints between the hand bones (metacarpals) and the first row of finger bones (proximal phalanges). The interphalyngeal joints (IP joints) are hinge joints that lie between the phalanges (proximal and middle; middle and distal). Each MP and IP joint has its own joint capsule with an outer fibrous layer and inner synovial membrane. The joint capsule is strengthened by collateral ligaments on either side (medial and lateral).