Skin rashes are a common medical problem that can occur anywhere on the body A breast rash is a common complaint among women at some point or the other in their lives. Depending on the type of rash, it may not be serious and not even require treatment. However, at other times it can cause distressing symptoms, affect a person’s quality of life, impede breastfeeding and even lead to skin discoloration and darkening. The type of rash largely depends on the cause. Sometimes even the most innocuous breast rash can be a symptom of a serious and even life-threatening condition.

Skin Rashes On The Breast

The skin on the breast is not significantly different from elsewhere on the body apart from the nipples. It can become irritated, inflamed and skin growth can become defective in much the same way as it would occur on the torso, limbs, or face. However, there are two factors that are relatively specific for the breast – the change in size which occurs with hormonal fluctuations, and the use of a bra in women which is in constant contact with the breast tissue and often pressing firmly against it.

A rash is basically any visible (can be seen) and/or palpable (can be felt) abnormality on the skin or just beneath it. Some rashes may last for just a few hours or days while others can persist for weeks, months or even years. A rash can be itchy, burning, painful or there are no abnormal sensations on the affected area. The skin changes may include dryness, redness, peeling/cracking, oozing discharge or have lesions like vesicles, cysts, pustules, papules and nodules.

All of these characteristics are important to consider because a skin rash is a symptom, not a disease. The rash on one breast can therefore be significantly different from another, even when it looks the same.

Breast cancer is a serious and life-threatening condition and has not been discussed in this article beyond Paget’s disease of the breast. A skin rash is not evident with all types of cancer of the breast. Refer to the article on breast cancer and breast tumors.

Nipple dermatitis is simply irritation and inflammation of the skin of the nipples. It can be due to atopic dermatitis, irritant contact dermatitis or allergic contact dermatitis discussed above. However, the difference with the breast is that it is often due to conditions that are localized to the breast, like irritation from breastfeeding, allergies to the bra fabric, recurrence of atopic dermatitis from earlier in life that may occur during pregnancy or with other changes, nipple piercings or breast tattoos.

This is a picture of acute dermatitis on the hand. The presentation may be similar on the nipple. 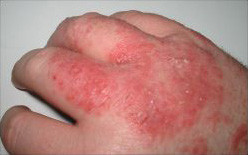 Mastitis is inflammation of the breast tissue that is usually due to an infection. It is fairly common among breastfeeding women as the nipple becomes cracked and bacteria enters the underlying tissue. This is known as lactation mastitis. When it occurs among women who are not breastfeeding then it is referred to as non-lactational mastitis. Some women may have nipple dermatitis prior to mastitis setting in. Mastitis can lead to breast abscess formation.

An abscess is a collection of pus that can occur anywhere on or in the body. It occurs when the body quickly walls off an area where microbes like bacteria enter or settle in the body. An abscess is the body’s way of isolating an infection, destroying the microbes and then ‘cleaning’ up the area.

Most breast abscesses occur just under the skin but it is possible for an abscess to arise deep in the breast tissue. It is more likely to occur in breastfeeding women often as a complication of mastitis (breast infection). Less commonly an abscess may arise with injuries that allow for bacteria to gain entry deep into the breast tissue.

The symptoms are largely the same as a breast infection. This includes: 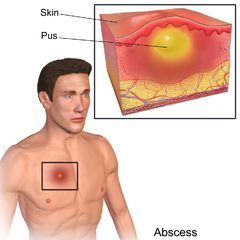 This is a picture of a superficial abscess lying close to the skin. The central dark lesion may not always be evident in an abscess. Notice the round patch of skin redness.

Paget’s Disease of the Breast

Mammary duct ectasia is a condition where the milk-carrying ducts within the breast become obstructed. It occurs when the wall of the lactiferous ducts become thicker than normal and the ducts become filled with fluid. The condition is more likely to occur as a woman gets older and is not solely linked to pregnancy or breastfeeding. It is often asymptomatic if inflammation does not set in but once it becomes the inflammatory variation then breast symptoms become prominent. 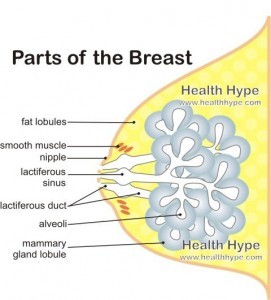 The symptoms are usually the most intense on and around the nipple. These symptoms include: