Dracunculiasis is a nematode (parasitic worm) infection caused by the guinea worm, Dracunculus medinensis. It is also known as guinea worm disease (GWD). It has become a very rare infection due to various eradication campaigns globally over the past quarter of a century. Dracunculiasis may be eradicated completely in years to come. The worm enters the gut through contaminated water and then migrates to the skin once it matures. A guinea worm infection is rarely serious to the point where it causes major debility  or death. However, bacterial infections may arise at the site where the worm erupts from the skin. In rare cases, the bacterial infection can complicate to the point of sepsis which may be life-threatening.

Guinea worm disease is rare these days as global eradication programs have reduced the incidence by over 90%. It is currently considered endemic in only four countries – Chad, Ethopia, Mali and Sudan. The majority of cases are currently seen in South Sudan. Young adults are more commonly infected and guinea worm disease does not have a race or gender predilection.

The Cyclops species of fresh water fleas (copepods) are small crustaceans that are 2 to 3 mm in length. These five-legged invertebrates have a hard outer shell and are closely related to shrimp and crabs.  It derives its names from the single black or red eye in the middle of its head. The water fleas may ingest the Dracunculus (guinea worm)  larvae and humans then consume water containing the infested fleas. Once inside the human gut, the flea is destroyed by stomach acid and the guinea worm larvae are released. 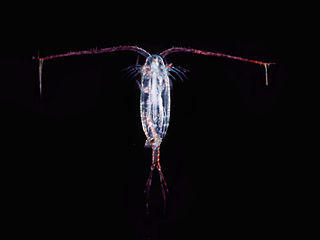 The larvae then penetrate the wall of the gut and enters the abdominal cavity. Here the adult male and female mature and mate. It appears that the male worm then dies while the female worm travels to the subcutaneous tissue (tissue under the skin). The head of the female worm penetrates the skin and once it makes contact with water, it releases larvae into the water. These larvae are motile and is then ingested by the fresh water fleas and the entire cycle starts again.

The adult female guinea worm may be as long as 1 meter in length by the time it matures and gradually makes its way to the subcutaneous tissue. Since it is only 1 to 2 millimeters wide, it can travel through the subcutaneous tissue to sites where its head will eventually emerge through the skin. Allergic reactions to the worm antigens may be seen just before eruption but often patients are asymptomatic until the worm erupts through the skin. The foot is the preferred site of eruption.

Eventually the head of the worm causes the skin to thicken at the point of future eruption. This thickened lesion blisters and ruptures. An ulcer forms through which the head of the worm is visible. The trauma to the skin causes significant inflammation. The worm is then expelled and the ulcer heals. However, if the worm breaks while being expelled or during extraction then it can trigger a severe inflammatory reaction. Worms that die along its course to the skin may become be broken up (disintegrate) or calcified (hardened with calcium deposits).

Patient with guinea worm disease are largely asymptomatic until the worm erupts. Prior to eruption the following non-specific symptoms may be seen :

With eruption of the worm from the skin, the following symptoms become evident :

Eventually the worm and larvae are expelled and the symptoms gradually ease. The ulcer heals and there is a complete resolution of symptoms. 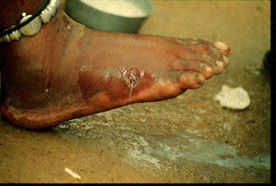 There is a risk of a secondary bacterial infection at the site leading to complications such as :

Complications are more likely to arise with poor wound care, untreated superficial infections and breaking of the worm during extraction.

Guinea worm disease is an infection by the Dracunculus mediensis nematode. The disease is known as dracunculiasis. The parasite has to complete its life cycle in a human hosts and copepods (water fleas). Humans ingest infested copepods incidentally when drinking contaminated water. The larvae have a very short lifespan in fresh water of about 2 to 3 days unless they are within a host. Once inside the copepod the larvae only become infective to humans within 2 weeks after completing two molts.

Dracunculiasis is a rare disease. Travelers to endemic areas are at greater risk of contracting the infection through the following modes of transmission :

There are no specific laboratory tests to confirm a diagnosis of dracunculiasis. Diagnosis is often reached during clinical examination when the white string-like worm is seen in an ulcer. A history of traveling to endemic areas usually confirms the diagnosis along withe progression of symptoms and skin ulcers. Dead calcified worms may be seen on x-ray. Blood tests such as a complete blood count (CBC) and immunoglobulin levels may confirm the presence of an infection but it is not specific for dracunculiasis.

There is no specific medication that can treat dracunculiasis. Instead the worm should be extracted, the wound disinfected and nonsteroidal anti-inflammatory drugs (NSAIDs) prescribed for the pain and inflammation. Antiparasitic drugs may be helpful to expedite the extraction process. Systemic antibiotics are only prescribed if a secondary bacterial infection has set in. Surgical removal of the worm (excision) is not routinely conducted unless the appropriate facilities are available.

The worm can be extracted slowly by wrapping it around a stick over several days, and sometimes weeks. It has to be done carefully to avoid breaking the worm midway. The following procedure extracts the worm carefully without breakage in most cases. 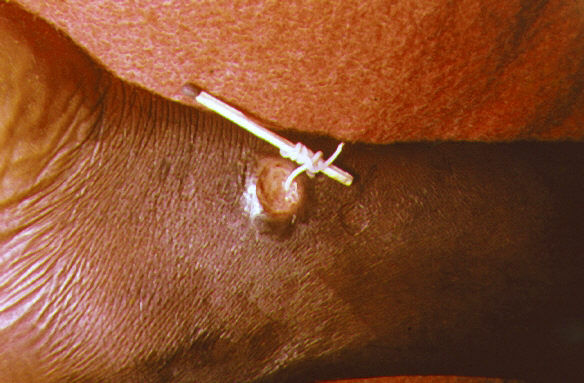