What is often termed as an ‘itchy bum’ among children may be a symptom of a pinworm infection. It is not a serious condition but is very common occurrence among young children. However, older children, adolescents and adults may also be at risk of what is sometimes called ‘childhood worms’ if they live with or have close contact with infected children. Sometimes there are no symptoms. At other times the symptoms may not be as obvious as an ‘itchy bottom‘. But every parent with young children needs to be aware of pinworms.

What is a pinworm?

A pinworm is a type of parasitic worm (helminth) that resides in the intestines of humans. The correct scientific name for this worm is Enterobius vermicularis but it is also known by other common names like threadworm or seatworm. It is a roundworm and there are many similar types of worms that can cause infestations in the human gut, and sometimes in other parts of the body. Most pinworm infections are seen in children and it is the most common parasitic worm infection of the intestine in the United States.

The eggs (ova) of the pinworms enter the gut through the mouth. It hatches as it passed through the upper gut eventually emerging as larvae around the duodenum (first part of the small intestine). The larvae migrate to the last part of the small intestine (ileum), cecum, appendix and ascending colon of the large intestine. It moults twice during its transit to eventually become an adult worm. Females have a lifespan of approximately 5 to 7 weeks while males survive for about 7 weeks.

The male and female pinworms mate in the ileum and the gravid female pinworm remains in the junction of the small and large intestines (ileocecal region) until ready to deposit the eggs. It then travels through the colon and rectum to emerge from the anus and pierces the skin with its ‘pin’ to deposit its eggs. The larvae that hatch from these eggs can enter the colon via the anus (retrograde infection) or the eggs may be passed out into the environment before it hatches.

Pinworms can be spread from one person to another. It is transmitted when an uninfected person eats the eggs of the pinworm. These eggs may be passed through direct contact with an infected person, through food or through inanimate objects. Door knobs, towels, bed linen, toilets, crockery and utensils, furniture and a range of surfaces can act as fomites. Therefore the risk is greater when living with a person with a pinworm infection or dealing with children, like day care workers and nannies.

The eggs of the pinworms can survive for 2 to 3 weeks on these surfaces. Proper hygiene measures both in the home and day care center or school is necessary. Furthermore the child needs to be taught to wash his or her hands thoroughly after using the toilet and not to scratch the bottom or touch it. Re-infection is where the infected child consumes new eggs after treatment and it is common with pinworm infection in childhood. Therefore family members and other close contacts should be simultaneously treated to prevent further spread. 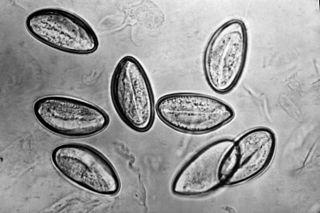 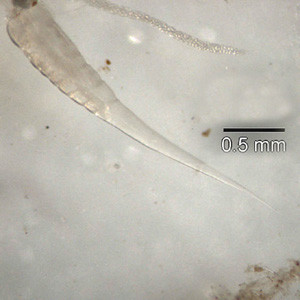 A pinworm infection does not always present with symptoms. Typically there are no symptoms while the worms are in the ileocecal region within the body. Symptoms become prominent when the worms exit the anus and start laying eggs, or when eggs in this area then hatch. These symptoms may include:

Symptoms are more likely to be prominent among children but he majority of those infected are asymptomatic. Itchiness is not always present and sometimes a person may feel a prickling type of pain rather than itching.

The female adult pinworm may be visible to the naked eye around the anus (perianal region) but the eggs are microscopic. It is the presence of eggs that is a better measure to confirm the diagnosis of pinworm infection. This is done with the tape test.

A cellphone adhesive tape is used to trap the eggs for microscopic examination. It is done by applying the sticky side of the adhesive tape on the skin around the anus. This procedure should be done in the morning once the person awakes but before bathing or using the toilet. It is best to repeat this procedure at least three days in a row as three tapes have as high as a 90% sensitivity compared with a 50% sensitivity of a single tape. The tapes should then be given to the doctor.

Persistent perianal itching and recurrent infections may require a stool sample. There are other possible intestinal parasites that could be responsible rather than pinworms. The stool sample is sent to the laboratory for a detailed analysis. It is extremely important that parents who collect stool samples for their children use gloves and wash their hands thoroughly with a disinfectant. The risk of contracting the pinworm infection is high during these type of procedures.

Pinworm infection can be very easily treated with anthelmintic drugs. This is medication that specifically destroys parasitic worms in humans. Different anti-parasite drugs may have varying efficacy against specific worms. Younger worms may sometimes be resistant to these drugs but eradication is still possible. For pinworm (Enterobius vermicularis) infection, the following two drugs are the most commonly used: