The human clavicle, also known as the collarbone, is a short bone that connects the upper limbs (arms) to the trunk. It can be easily felt under the skin lying above the first rib and in thin people it can also be clearly seen. The clavicle is a strong and resilient bone that has to bear the weight of the upper limb and remains firm in its position to provide stability to the ligaments and muscles attached to it. It has two important joints – the acromioclavicular (AC) joint where it meets the shoulder blade (scapula) and the sternoclavicular (SC) joint where it meets with the breastbone (sternum).

What is a swollen clavicle?

A swollen clavicle is any fluid accumulation or enlargement in and around the collarbone. In some cases the swelling does not involve the collarbone itself. The most common cause is soft tissue injury which commonly affects the muscles and subcutaneous tissue thereby causing swelling over the clavicle. 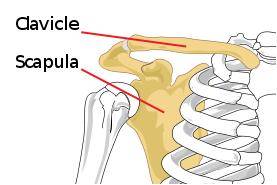 It may involve any of the muscles that attach to the clavicle as well as the platysma muscle which lies above and over the top of the clavicle. Swelling of the clavicle itself is referred to as a bony swelling. It may arise with injury to the bone and is more prominent with a fracture.

Symptoms of a Swollen Clavicle

A swollen clavicle is a symptom and not a disease. It may be accompanied by various other symptoms including :

The symptoms may vary and depend on the cause of clavicle swelling.

It is important to first differentiate between soft tissue swelling around the clavicle and swelling of the bone itself. Swelling occurs due to inflammation which is the mechanism to protect tissue that is undergoing any injury or damage. The blood vessels allow fluid to seep out into the tissue spaces which then accumulates and causes edema (swelling).

Trauma is the most common cause of a swollen clavicle. It may occur with or without a fracture. Some of the causes of injury to the clavicle includes :

Being a bone, the clavicle is hard and fairly resistant stress and injury. Minor injury may cause soft tissue swelling arising from the tissue just underneath the skin (subcutaneous tissue), the muscles like the platysma muscle, tendons of the muscles that attach to the clavicle, connective tissue or ligaments. Major injuries may possibly cause a fracture of the clavicle.

An infection of the clavicle rarely occurs on its own without other bones or surrounding tissue also being involved. It is more likely to be due to bacteria which may reach the bone through one of the followings routes :

This infection of the bone is known as osteomyelitis. Sometimes they infection does not affect the bone but occurs around it most notably in the subcutaneous tissue and skin in which case it is known as cellulitis. However, cellulitis is not common on the trunk of the body and when it does occur it can quickly spread to the internal organs with severe complications or even fatal consequences. Another infectious cause of clavicle swelling is congenital syphilis (present from birth). Swelling of the clavicle at this point is a late feature of syphilis. 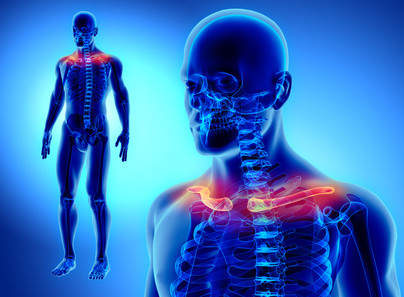 Swelling of the bone is most likely associated with severe trauma, certain disorders with bone growth and remodeling and bone tumors.

In terms of joint inflammation, the more likely joint to be affected is the acromioclavicular (AC) joint, where the clavicle meets the shoulder blade. However, this joint is largely covered by the rotator cuff muscles of the shoulder and swelling at the area is barely visible. It is therefore more likely for inflammation of the SC joint, where a clavicle meets the breastbone sternum, to lead to visible or palpable swelling since it lies superficially. This will be evident as swelling closer to the midline, near the top of the breast bone.

Other possible causes have been discussed under swollen neck lymph nodes.