What is the Pituitary Gland?

The pituitary gland is considered as the master gland of the body because its hormones control other endocrine glands, which in turn influence various and diverse activities in the body. It is largely influenced by the hypothalamus, which is the control center that processes the incoming signals from various parts of the body and triggers the appropriate actions to maintain a state of balance (homeostasis). The hypothalamus sends hormonal signals to the pituitary gland to either stimulate or inhibit the production and secretion of certain hormones.

The pituitary gland can be divided according to its two compartments :

The anterior lobe which constitutes about 80% of the gland also produces and secretes most of the pituitary hormones. There are five types of cells responsible for hormone production in the anterior pituitary.

Function of the Pituitary Gland Hormones

These pituitary hormones, either indirectly by acting on specific glands or directly on target tissues, can have the following effects :

Size of the Pituitary Gland

The pituitary gland is a small round organ that is about 1 centimeter in diameter and occupies a small groove in the base of the skull known as the sella turnica. Weighing in at between 0.5 to 1 gram, this small pea-sized gland is able to influence every other endocrine gland in the body and therefore known as the “master gland”.

The pituitary gland is controlled to a large extent by the hypothalamus (illustrated in the picture below) which lies above and slightly behind the gland. These two structures are connected by the pituitary stalk (also known as the hypophysial or infundibular stalk). The hypothalamus is able to send stimulatory or inhibitory hormones to the pituitary gland thereby regulating its action on other endocrine glands and the body as a whole.

Around the Pituitary Gland

Other structures around the pituitary gland include the :

These close relations to the pituitary gland are an important consideration if there are any pituitary problems related to space-occupying lesions – gland hyperplasia, tumors, hemorrhage or abscess. The pressure on the surrounding areas will elicit a host of signs or symptoms although the primary pituitary lesion may have gone unnoticed. The most prone of these areas is the optic chiasm. One of these complications is known as bitemporal hemianopsia, where the temporal visual field is impaired, as a result of compression on the structures of the optic chiasm.

Location of the Pituitary Gland

The pituitary gland’s location to the different parts of the central nervous system is illustrated in the picture below. 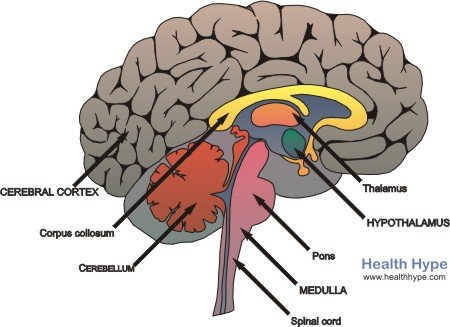 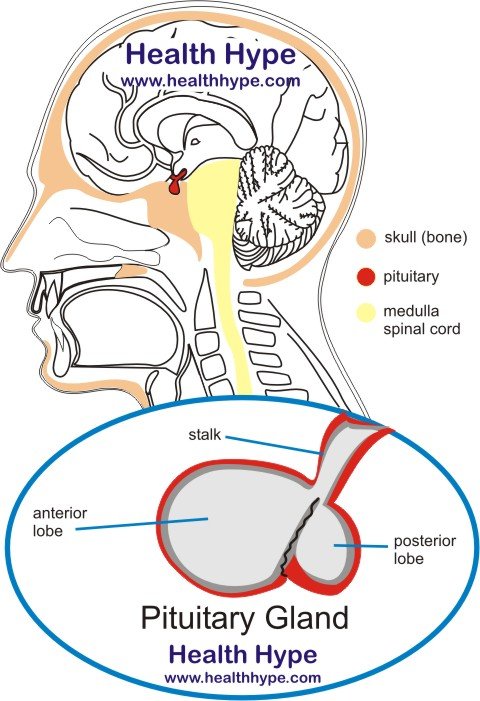 Between the anterior and posterior lobes lies a zone known as the pars intermedia. It has no function and is almost absent in humans although quite prominent in other animals.