Fluid in the lungs specifically refers to a condition known as pulmonary edema. However, the term may sometimes be confused with other conditions like fluid outside or aroun the lungs which is pleural effusion. Both causes characteristic symptoms, like a bubbling sound in the lungs (rales) when breathing. The term “fluid in the lungs” is also used to refer to mucus inside the lungs. Mucus or phlegm is a thick, sticky secretion while “lung water” is a thin fluid. Other fluid accumulation may be the result of  blood or pus.

The lungs are located in the thorax (chest) and lies on either side of the heart. Air travels through the air passages, which includes the nose, pharynx (throat), trachea (air pipe) and bronchi. The lung tissue is made of small air sacs, known as alveoli, which is thin and surrounded by blood capillaries. 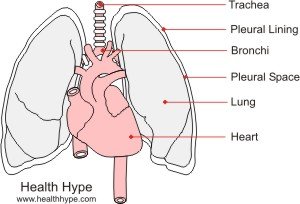 The structure of the respiratory system allows for an exchange of gases so that essential oxygen is taken into the body and waste products, along with gases, are excreted through the exhaled air. The lung is enclosed in an air tight pleural cavity, with a small pleural space separating the lung from the chest wall. This cavity is lined by the pleural lining, which also produces a little pleural fluid to reduce friction between the chest wall and lungs during breathing.

What is pulmonary edema?

Pulmonary edemia is the accumulation of fluid in the lung spaces. This fluids can be tissue fluid, plasma (from the blood), blood or mucus (phlegm), which is produced by the lining of the respiratory tract. The respiratory tract is lined with a mucus membrane, which is a specialized tissue that produce smucus.

This mucus lubricates the lining, which may dry out due to the air moving in and out of the passages, as well as to trap any dust or microorganisms in the air. However in certain conditions, the mucus membranes of the air passages may produce excessive amounts of mucus and this may slowly ‘sink’ lower down the air passages until it settles in the lungs.

The cough reflex or even spontaneous coughing will usually propel most mucus out through the mouth (sputum), however in cases of excessive mucus production, obstructive airway disease or diminished coughing, the mucus build up will quickly settle in the lungs.

Water in the Lungs

“Lung water” or water in the lungs usually results from interstitial fluid or blood plasma and may be an indication of a more serious underlying disorder, usually cardiovascular conditions. This fluid inside the lung is known as pulmonary edema and may be accompanied by a shortness of breath or difficulty breathing (dyspnea), a feeling of suffocation, anxiety and restlessness. Abnormal breathing sounds are also present, particularly crackling. Pulmonary edema may be considered a medical emergency and immediate medical intervention is required. 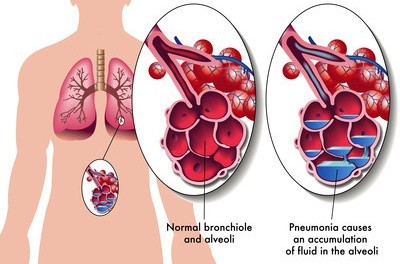 Blood inside the Lungs

Causes of Fluid Inside the Lungs

Fluid Outside the Lungs 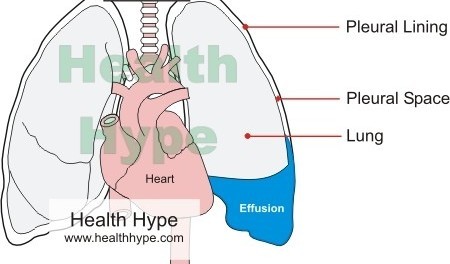 Some Causes of Fluid Around the Lungs

Diagnosis of Fluid in the Lungs

Upon physical examination, your doctor will be able to identify abnormal sounds like bubbling or crackling (rales) with a stethoscope upon respiration. A wheezing sound (stridor) may be clearly audible as well when exhaling. Percussion is a tapping motion conducted against the chest wall and will assist your doctor with identifying areas of the lung that may be affected.

Typically fluid accumulation causes a dull sound compared to the normal hollow sound of the air filled lung. Based on clinical findings and other signs and symptoms, your doctor may request further diagnostic investigations, which may include the following procedures.

Treatment is dependent on the cause of the fluid in the lungs. Some of the treatment options may include :